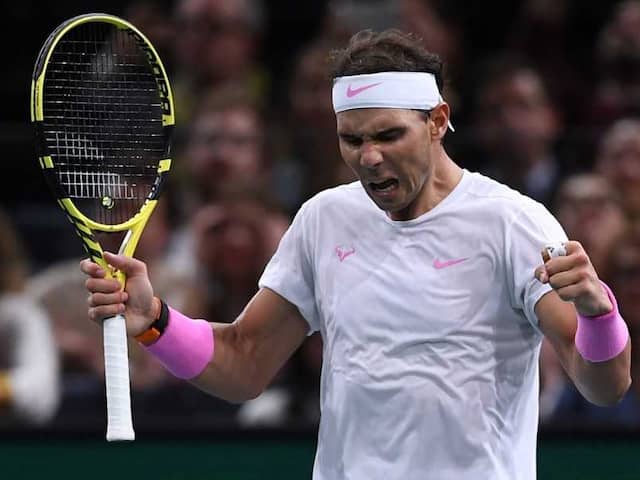 Rafael Nadal is guaranteed to usurp Novak Djokovic at the rankings summit next week.© AFP

Novak Djokovic defied illness to survive a scare against French lucky loser Corentin Moutet and reach the third round of the Paris Masters on Wednesday, while Rafael Nadal saw off a plucky challenge from Adrian Mannarino. Top seed Djokovic, locked in a battle with Nadal for the year-end world number one spot, had to save two set points in the first set before beating the 97th-ranked Moutet 7-6 (7/2), 6-4. The 32-year-old will play Britain's Kyle Edmund on Thursday in the last 16 as he continues his bid for a record-extending fifth Bercy title.

"I don't feel health-wise 100 percent in the last couple of days, but it is what it is," said Djokovic, who was struggling with a sore throat.

"It affects your energy, your vitality on the court. Obviously it's not ideal, but in these kind of circumstances you just have to accept it and do everything that you can to recover."

Nadal, who is guaranteed to usurp Djokovic at the rankings summit next week ahead of the ATP Tour Finals in London, beat home wildcard Mannarino 7-5, 6-4 to set up a clash with three-time Grand Slam title-winner Stan Wawrinka.

Djokovic, who was beaten by Karen Khachanov in last year's final, found himself in a spot of bother when Moutet broke his serve in the seventh game before saving four break points to seize a 5-3 lead.

But the home hope saw two set points come and go in the following game, with Djokovic quickly taking advantage to break back and level the set.

The Serbian took control as the opener entered a tie-break and Moutet smashed a ball into the crowd in anger as his opportunity for an upset looked to have disappeared, with his opponent cruising through the breaker.

Moutet delighted the crowd with an outrageous 'hotdog' lob over Djokovic early in the second set, but the 16-time Grand Slam champion belatedly found his form.

Djokovic did let one break slip after leading 4-1, but closed out victory on his first match point with a forehand winner.

Nadal was not at his imperious best against world number 43 Mannarino, but did enough to win with relative comfort.

The 19-time Grand Slam champion, who has never won the tournament but does hold a record 35 Masters titles, will hope to improve in the third round against Wawrinka after the Swiss beat Marin Cilic 7-6 (7/3), 7-6 (7/5).

Nadal, playing his first event since getting married earlier this month, can secure the year-end top ranking for a fifth time by winning the trophy on Sunday.

"(It's) not easy to come back after a while without being on the tour," he said. "Tomorrow is another day, another tough match against Stan. Every day on this tournament is so difficult."

Mannarino kept Nadal at arm's length for almost an hour in the first set, but the Spaniard took his fourth set point in the 12th game to forge ahead.

There was a similar pattern to the second set, but again the second seed went through the gears when necessary and a sloppy service game from Mannarino sealed his fate.

Earlier in the day, fifth seed Dominic Thiem booked his spot in the last 16 by edging out Milos Raonic in a marathon encounter.

Thiem, who has lost the last two French Open finals to Nadal across Paris at Roland Garros, had to dig deep to get past Raonic 7-6 (7/5), 5-7, 6-4 as the Canadian powered down 30 aces in a thunderous serving display.

"It was unbelievable today, his serve," admitted the Austrian.

Thiem will face Grigor Dimitrov in the last 16 after the Bulgarian's 7-5, 6-3 win over 12th seed David Goffin.