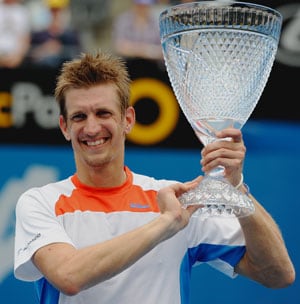 Nieminen, ranked 77th, came into the pre-Australian Open contest with a 4-0 head-to-head record against Benneteau and took a firm grip on the match, forcing three breaks of serve in the first set.

The second set at Olympic Park went with serve, with the 49th-ranked Frenchman saving a match point in the 10th game with a forehand winner to stay alive.

But Nieminen refused to be denied, holding serve and breaking his fellow 30-year-old to take the second set 7-5 in a contest lasting just short of 80 minutes.

The only previous ATP title for the left-handed Niemenen, a beaten Sydney finalist in 2009, came in Auckland in 2006.

Persistent showers on Saturday had prevented any play between the unseeded Benneteau and Nieminen, who has been ranked as high as 13th.

The Australian Open, the year's first grand slam, starts in Melbourne on Monday.

Comments
Topics mentioned in this article
Tennis Jarkko Nieminen Julien Benneteau
Get the latest updates on Olympics 2020, Olympics 2020 Medal Tally, Live Cricket Score . Like us on Facebook or follow us on Twitter for more sports updates. You can also download the NDTV Cricket app for Android or iOS.