Hampton squandered five set points in the opening set to give the momentum to her opponent, But Wozniacki was unable to serve out the second set leading 5-4 after winning the first in a tiebreaker and came up short in the third. 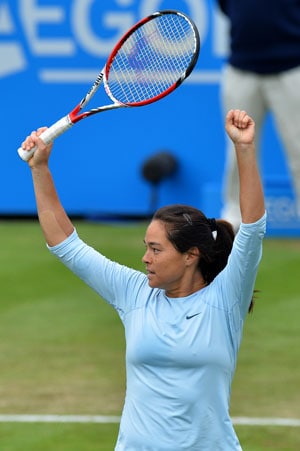 American qualifier Jamie Hampton will line up in the first final of her career against Russian Elena Vesnina in a first-time meeting for the title at the pre-Wimbledon ATP-WTA Eastbourne International on Saturday.

The 41st-ranked Hampton earned her place with a 6-7 (8/10) 7-5, 6-3 upset of former world number one Caroline Wozniacki on Friday, while Vesnina followed up her ouster of China's second seed Li Na in the quarter-finals by crushing Belgian Yanina Wickmayer 6-2, 6-0 in just 51 minutes.

The Hampton-Wozniacki clash took nearly three hours but could have ended much earlier had fifth seed Wozniacki managed to complete a straight-sets win.

As it was, the Dane was made to pay the price for missed opportunities by her surprise opponent in their first meeting.

"Obviously I would have loved to have won today, it would have been worth it to be out there for three hours," said Wozniacki.

"Actually we played a very good match. The wind that was there, it was so difficult. But I had my chances. I didn't take them, and, she played very well, I have to say.

"Overall I'm feeling good, I feel happy to be on grass. I feel like my game is where I want it to be. Hopefully at Wimbledon I'll do well."

The match was played in blustery conditions on the English south coast after several days of sunshine and atypical calm weather.

Hampton squandered five set points in the opening set to give the momentum to her opponent, But Wozniacki was unable to serve out the second set leading 5-4 after winning the first in a tiebreaker and came up short in the third.

Hampton, 23, will move into position as US number three behind Serena Williams and Sloane Stephens after the best week of her career.

Hampton was the first American woman since Jennifer Capriati a decade ago to play the semis at Devonshire park and is the first qualifier on the WTA to reach a final this season. The last American to win here was Chanda Rubin in 2003.

Hampton upset Wozniacki while playing in only her third career grass event and will compete at Wimbledon next week for only the second time after reaching the second round a year ago.

Wozniacki was denied a chance at her second career grass court title after winning Eastbourne in 2009.

Vesnina will aim for her second career trophy after making a breakthrough for the Hobart honours in January. The Russian stands 1-7 in career finals.

Comments
Topics mentioned in this article
Tennis AFC Wimbledon Mahesh Bhupathi Caroline Wozniacki Jamie Hampton Yanina Wickmayer Elena Vesnina Sania Mirza
Get the latest updates on IPL 2020, check out the IPL Schedule for 2020 and Indian Premier League (IPL) Cricket live score . Like us on Facebook or follow us on Twitter for more sports updates. You can also download the NDTV Cricket app for Android or iOS.