India's Leander Paes and Mahesh Bhupathi have crashed out of the doubles at the Barclays ATP World Tour Finals doubles, losing their semifinal match to Polish pair Mariusz Fyrstenberg and Marcin Matkowski in the super tiebreak. 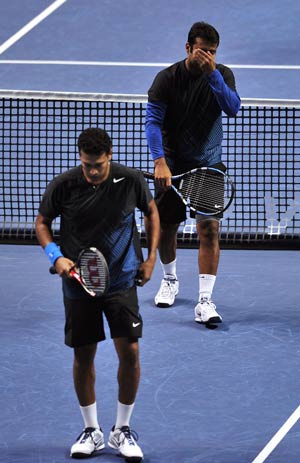 India's Leander Paes and Mahesh Bhupathi have crashed out of the doubles at the Barclays ATP World Tour Finals doubles, losing their semifinal match to Polish pair Mariusz Fyrstenberg and Marcin Matkowski in the super tiebreak.

Eight-seeded Frysteberg and Matkowski won 4-6, 6-4, 6-10 Saturday and will now meet third seeds in Sunday's final third seeds Max Mirnyi of Belarus and Canadian Daniel Nestor who beat World No 1 pair Bryan twins, Bob and Mike, in straight sets, 7-6 (6), 6-4 in the other semifinal.

Fourth seeds and three-time former finalists Bhupathi and Paes , battled it out for one hour and 39 minutes before bowing out playing together for the last time on the Tour, having decided to split after this tournament.

Both teams gave little away until the 10th game of the first set, when Bhupathi, serving at 4-5, fell to 30/40. He saved the set point by dashing for a backhand volley winner that pierced the 'Polish Power' down the middle.

However, Matkowski forced Bhupathi into a volley error at sudden death deuce to clinch the first set 6-4 after 39 minutes of play. Fyrstenberg and Matkowski won all 11 of their first service points and 20 of 27 overall.

In the second set, Paes found himself at 15/40 in game two. The Indians remained in control of the point until Fyrstenberg changed the pace of the rally by hitting a lob down the line.

It caught Paes off guard. Scrambling back to the baseline, he hit a short lob that Fyrstenberg smashed away for a 2-0 lead.

Bhupathi and Paes responded immediately by winning three straights games, including a sudden death deuce point at 2-2, 30/40, when Matkowski hit the Poles' third double fault of the match.

Two more service breaks were exchanged, before Bhupathi and Paes decisively broke at 4-4, when Bhupathi hit a low return to the feet of a net-rushing Matkowski, only for Paes to poach a forehand volley that gave Fyrstenberg no chance of keeping the rally alive. Paes closed out the 46-minute set with a hold to 15.

Bhupathi and Paes looked to be in control at 3-0 lead in the Match tie-break, but the Poles took their chances on return of serve to win nine of the next 11 points.

At 5-5, Paes mis-timed a forehand volley off Bhupathi's serve, giving Fyrstenberg an easy forehand into space. Fyrstenberg took advantage of the lapse in concentration with two quick service points.

'Polish Power' ended up winning one point fewer (64) than the 'Indian Express' (65) overall.

"If you could reproduce it every time it would be no fun," Mirnyi told atpworldtour.com.

"We know it won't happen every time. We knew we had to serve well against Bob and Mike, so we went after our serves and attacked any first volley above the net."

Mirnyi and Nestor, who went 3-0 in Group B round-robin play, are both former champions at the year-end championship.

Comments
Topics mentioned in this article
Tennis Mariusz Fyrstenberg Leander Paes India Cricket Team
Get the latest Cricket news, check out the India cricket schedule, Cricket live score . Like us on Facebook or follow us on Twitter for more sports updates. You can also download the NDTV Cricket app for Android or iOS.