Novak Djokovic cut giant Argentine Juan Martin del Potro down to size as the world number one battled into the final of the ATP Tour Finals with a 4-6, 6-3, 6-2 victory on Sunday. 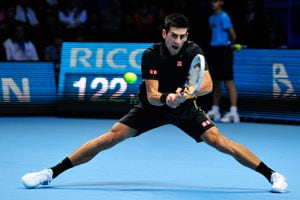 Novak Djokovic cut giant Argentine Juan Martin del Potro down to size as the world number one battled into the final of the ATP Tour Finals with a 4-6, 6-3, 6-2 victory on Sunday.

Djokovic will play defending champion Roger Federer or third seed Andy Murray in Monday's final after coming from a set and a break down to topple the 6ft 6in former US Open champion in a gruelling semi-final clash lasting two hours and 11 minutes at London's O2 Arena.

After another impressive season, which will end with Djokovic the world's top ranked player for the second successive year, the Serb now has a chance to cap his campaign by taking the title at the season-ending event for the second time.

The 25-year-old won the Tour Finals in 2008 in Shanghai and he looks in the mood to emulate that success after moving into the final with four consecutive victories -- the only unbeaten run of the eight competing players -- taking him to 74 match wins in 2012, a record that only David Ferrer has equalled over the last 11 months.

Djokovic had won six of his previous eight meetings with del Potro, but the reigning Australian Open champion had to draw on all his remarkable reserves of energy and determination before finally seeing off the big-hitting sixth seed.

Del Potro has been in superb form over the last few weeks, winning titles in Vienna and Basle and then defeating Federer on Saturday to book his place in the last four and end the Swiss great's 12-match winning run at the Tour Finals.

Both players are masters of the power game and a bruising start saw del Potro survive an early scare as he saved two break points in the second game before Djokovic fought off a break point at 3-3.

Few players can out-hit Djokovic in baseline rallies, but del Potro has the size and power to overwhelm anyone with his booming groundstrokes and he pressured the Serb into a pair of hurried errors to break for a 5-4 lead.

Djokovic had no answer as del Potro easily held serve to take the opening set and it needed the Serb's supreme battling qualities to stave off three break points in the first game of the second set.

The Argentine wouldn't be denied however. He was hitting with such a lethal combination of poise and power that even Djokovic was unable to stop him breaking for a 2-1 advantage.

At that point del Potro, who celebrated the break by clenching both fists above his head, was in complete control, but he may have started dreaming of the final prematurely.

Djokovic had no intention of surrendering and, aided by the suddenly rash of del Potro errors, he recovered from squandering three break points to convert at the fourth attempt in the next game.

Another break for the Serb opened up a 5-3 lead and he held his nerve to serve out the set and send the tiring del Potro back to his chair with shoulders slumped.

The momentum was with Djokovic now and he raced through the final set, shattering del Potro with breaks in the third and seventh games.

Comments
Topics mentioned in this article
Juan Martin del Potro Novak Djokovic Tennis
Get the latest Cricket news, check out the India cricket schedule, Cricket live score . Like us on Facebook or follow us on Twitter for more sports updates. You can also download the NDTV Cricket app for Android or iOS.