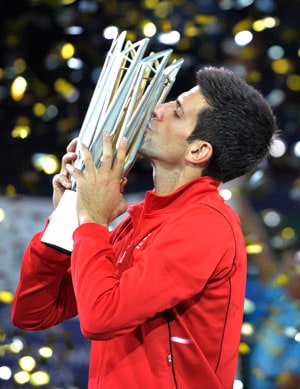 Novak Djokovic overcame a fierce challenge from Juan Martin del Potro Sunday to defend his Shanghai Masters title with a 6-1, 3-6, 7-6 (7/3) victory, bringing the Argentine down to earth after his heroics against Rafael Nadal.

Del Potro came into the final against the top seed brimming with confidence after his semi-final demolition of the Spanish world number one but was immediately on the back foot in breezy conditions at the Qizhong Tennis Center.

The 26-year-old Serb established an iron grip on the first set with a double break, dictating the play and not allowing the sixth seed to produce the thundering groundstrokes that dispatched Nadal, who re-claimed the top ranking this week from Djokovic.

The giant Del Potro avoided an embarrassing "bagel" to loud cheers but could not prevent Djokovic, playing with controlled aggression, from sealing the set.

But the Argentine, who won last week's Japan Open, got his act together at the start of the second set, breaking at his first opportunity in a bizarre game in which his Serb opponent appeared to have trouble keeping his balance.

Djokovic engineered a golden opportunity to break back, earning three break points in the seventh game but former US Open champion Del Potro upped his game to win five consecutive points for a hold and levelled the match by taking the second set 6-3.

Both players had chances to break in the third set and Del Potro saved two match points in the 10th game.

Djokovic, who was holding serve more easily than his opponent as the set wore on, held his nerve to win the tie-break with his third match point.

The Argentine, who stands six feet six inches (1.98 metres) tall, came into the match trailing 9-3 in head-to-heads, with their last meeting coming at this year's Wimbledon, where Djokovic prevailed in a five-set semi-final.

Victory for Djokovic, who won last week's China Open in Beijing, gives him a 20th consecutive win in China.

Comments
Topics mentioned in this article
Tennis Juan Martin del Potro Samantha Stosur Novak Djokovic Gael Monfils Rafael Nadal Roger Federer
Get the latest updates on ICC T20 Worldcup 2022 and CWG 2022 check out the Schedule, Live Score and Medals Tally. Like us on Facebook or follow us on Twitter for more sports updates. You can also download the NDTV Cricket app for Android or iOS.