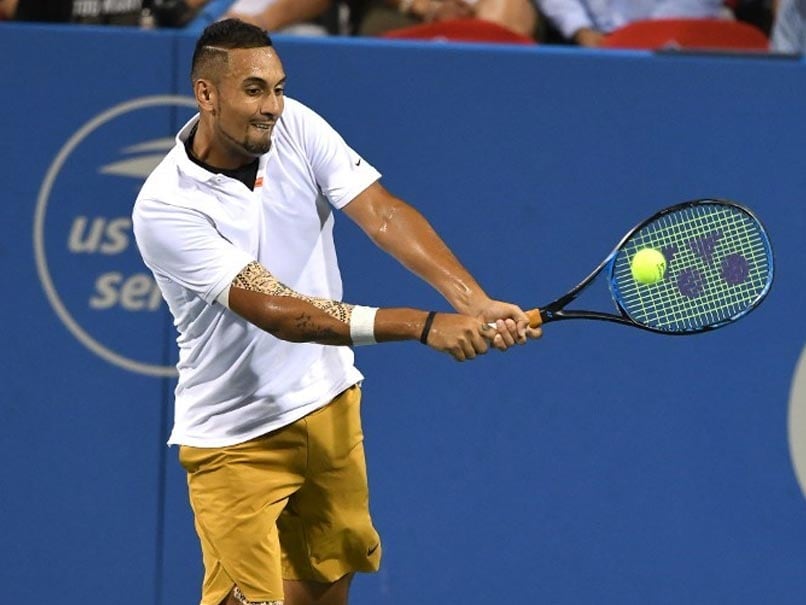 Australia's Nick Kyrgios overcame a mid-match meltdown and his rival's shoe repair delays Saturday to defeat Greek top seed Stefanos Tsitsipas and reach the ATP Washington Open final. The 52nd-ranked Aussie hammered 19 aces, saved a match point and often played to the crowd in a dramatic and emotional 6-4, 3-6, 7-6 (9/7) victory over Tsitsipas, whose shattered shoelaces led to two third-set delays. Tsitsipas, who becomes world number five on Monday, fell behind a set and a break, took advantage of Kyrgios losing control with racquet slams and call complaints to force a third set, only to fall in the tie-breaker.

Nick Kyrgios, who improved to 4-1 against top-10 rivals this year, seeks a sixth career ATP title and his first since Acapulco in March.

Kyrgios excited the crowd throughout with such flamboyant moves as underhand serves, between the legs shots and leaping drop shots.

The wild men's affair saw Kyrgios break Tsitsipas in the third game of the match and hold from there to claim the first set in 31 minutes. The Aussie dropped only three points on his serve, blasting seven aces.

Kyrgios broke again to open the second set but, after complaining about a serve review call his thought was an ace, he double faulted to surrender a break to fall level 2-2, slamming his racquet and towels to the court in anger.

Tsitsipas took advantage to force a third set, but then broke left shoelaces for a fourth consecutive match, switching pairs on a changeover with Kyrgios up 2-1.

A ballboy delivered a shoebox with the faulty shoe to Tsitsipas's father/coach, Apostolos Tsitsipas, in the stands. But it was Kyrgios, waiting through a delay that would last four minutes, who took the shoebox from the far corner of the court.

Kyrgios delivered it to a seated Tsitsipas, kneeling to put the box at his rival's feet, both of them smiling as the crowd roared with delight and laughter.

Tsitsipas held to level at 2-2, but Kyrgios -- who netted a between-the-legs shot to open the fifth game -- saved two break points and held, aided by another broken left shoe suffered by Tsitsipas, requiring another shoe switch from his dad on the changeover.

Later, Indian tennis legend Leander Paes would bring a new shoe into the stadium to the elder Tsitsipas and have it taken to the player on a changeover.

They battled into the tie-breaker, with Kyrgios racing ahead 5-1, then losing the next five points -- four after a ball girl was slow in taking a towel from him -- only to deny Tsitsipas on match point with a service winner.

Kyrgios then fired his final ace but netted a forehand on a point he would have won on a double fault had he challenged Tsitsipas's second serve.

The final dramatic twist came when Tsitsipas netted a forehand, Kyrgios delivering a shoulder shimmy after taking the intense penultimate point, and the Aussie hit an overhead smash winner for the triumph in two hours seven minutes.

It was the Greek star's first match against Kyrgios, who is of Greek and Malaysian heritage.

Medvedev, 23, seeks his fifth ATP title after taking his most recent crown at Sofia in February.

World number 122 Gojowczyk, whose lone ATP title came in 2017 at Metz, only reached he main draw after Aussie Bernard Tomic withdrew with a finger injury. He had lost 10 of his 12 prior matches before this week.

Comments
Topics mentioned in this article
Nick Kyrgios Tennis
Get the latest updates on ICC T20 Worldcup 2022 and CWG 2022 check out the Schedule, Live Score and Medals Tally. Like us on Facebook or follow us on Twitter for more sports updates. You can also download the NDTV Cricket app for Android or iOS.