World number one Rafael Nadal battled back from losing the first set against 239th-ranked Ivo Karlovic to reach the semifinals at Indian Wells on Thursday. 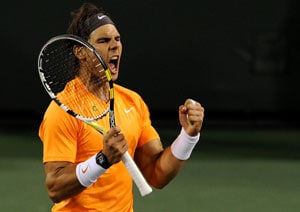 World number one Rafael Nadal battled back from losing the first set against 239th-ranked Ivo Karlovic to reach the semifinals at Indian Wells on Thursday.

The Spanish top seed clinched a 5-7, 6-1, 7-6 (9/7) win on his third match point in the third set tiebreak when the Croatian smacked a forehand long to end the match lasting nearly two-and-a-half hours.

"It was a very tight, difficult match," said Nadal, a two-time former winner of the tournament. "If you lose a set against Karlovic then you are under pressure for the rest of the match.

"In the third set his serve was unstoppable. In the tiebreaker I was really nervous. For sure it is a big day for me to be in the semi-final."

Nadal, who will be playing in his sixth consecutive semifinal at the tournament, will play Argentina's Juan Martin del Potro next, who progressed without even taking to the court after Tommy Robredo withdrew with an injury.

Nadal countered the hard-serving Karlovic, who reached a career-high ranking of 14, with some deft backhands, precision passing shots and good footwork on the main stadium court.

Karlovic survived two match points in the tiebreak but then hit a forehand long to give Nadal the win, sparking wild celebrations from the Spaniard, who sprinted across the court, punching the air in delight.

Nadal hammered six aces and won 84 percent of his second serve points for his fourth career win in four meetings over Karlovic.

"I am disappointed because it was close. It could have gone the other way, my way. But it was a good week so I am happy," said Karlovic, who blasted 23 aces.

"I have been playing well this week. My play from the back and volleying was really good."

The third set was back and forth as both players held serve right up until the tiebreak.

"My feeling was I had to put first serves inside and try to control the points with my forehand," said nine-time Grand Slam winner Nadal.

"I think I did that well, because he didn't have one opportunity in all the third set (to break). So that's always very positive, but at the same time, I didn't have a lot on the return, either."

Del Potro said he was glad to be in the semifinals and looked forward to locking horns with Nadal again.

"We make very good matches before, so I have two days to be better, in good form, and hopefully I can play 100 percent."

Robredo's surprise exit came after the Spaniard injured his left abductor muscle during his fourth-round match against Sam Querrey.

Robredo said he only realised the extent of the injury after he received the results of an MRI scan. The injury will also prevent him from playing in next week's ATP tournament in Florida, he said.

Del Potro, the 2009 US Open winner, has been one of the in-form players on the tour this year going into his first Indian Wells semi-final.

Nadal has a 4-3 edge over del Potro in career matches but the Argentinian has won the last three times they have met.

Comments
Topics mentioned in this article
Ivo Karlovic Rafael Nadal Tennis
Get the latest updates on ICC T20 Worldcup 2022 and CWG 2022 check out the Schedule, Live Score and Medals Tally. Like us on Facebook or follow us on Twitter for more sports updates. You can also download the NDTV Cricket app for Android or iOS.