My father fighting for his health gave me extra strength, says Novak Djokovic after Tour win

Novak Djokovic dedicated his ATP Tour Finals title to his sick father after the world number one produced one of his greatest performances to defeat Roger Federer 7-6 (8/6), 7-5 in the final on Monday. 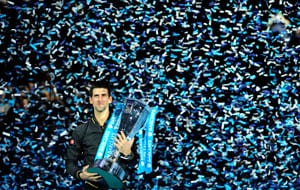 Novak Djokovic dedicated his ATP Tour Finals title to his sick father after the world number one produced one of his greatest performances to defeat Roger Federer 7-6 (8/6), 7-5 in the final on Monday.

Djokovic has been playing with a heavy heart over the last week at London's O2 Arena as his father Srdjan battles to recover from a blood disorder that struck suddenly a few weeks ago.

Despite the pain of knowing his dad was seriously ill at home in Serbia, Djokovic managed to focus on his game at the Tour Finals and stormed through the tournament with five consecutive victories to take the season-ending title for the second time.

But, after beating Federer to cap another fine year, the 25-year-old Serb was quick to pay tribute to Srdjan, who is gradually improving after being in a critical condition, and revealed he would take the trophy home to show his father this week.

"It was a fantastic year, where I've had to face a lot of difficulties off the court, especially coming into this tournament," Djokovic said.

"Having my father fighting for his health gave me extra strength that I wanted to play for him in a way.

"That's one of the reasons I really gave it my all every match, especially tonight. This was a title for him.

"He's much better now. The reason why I was reluctant to talk about it is because I don't think that's a subject for media. I don't want people to start talking about my father's health.

"But it's something that happened over the last couple of weeks. At a certain stage, it was very critical. We didn't know what tomorrow brings.

"Now he's much better and he's recovering. He's still in intensive care. I'm going to visit him tomorrow and see how it goes and try to bring a trophy with me and at least make him smile."

With his father hopefully on the mend, Djokovic can reflect on finishing the year as the sport's preeminent force for the second successive campaign.

The Serb won the Australian Open in January and reached the finals of the French and US Opens before ending the season in style with an epic victory over Federer to shatter the Swiss star's two-year reign as Tour Finals champion.

"It's been two very successful years," Djokovic said. "I didn't really know how I would follow up after an incredible 2011.

"I just believed I had to use the time where I'm playing the best tennis of my life to finally realize what I need to do to win the major tournaments.

"This was my time, my moment, and I really needed to believe in my ability.

"So throughout the whole season I've had lots of success and had some disappointing losses at big events, in a couple major finals. But, you know, all in all, it's tremendous.

"It's very satisfying for my team and myself to conclude this fantastic season with a World Tour Finals win.

"I wanted really to fight and get as far as I can in this tournament. Winning all the matches I played makes it even more special.

"I was playing really great tennis throughout the whole week. Tonight whenever I needed to, I came up with some really good shots. I cannot be more thrilled than I'm feeling now."

Comments
Topics mentioned in this article
Tennis Novak Djokovic
Get the latest Cricket news, check out the India cricket schedule, Cricket live score . Like us on Facebook or follow us on Twitter for more sports updates. You can also download the NDTV Cricket app for Android or iOS.