Murray hopes to go higher after reaching World No.2 with Miami title

Murray's rise to the second spot behind No. 1 Novak Djokovic of Serbia will edge Swiss great Roger Federer down, while Ferrer will move back to No. 4 in the world at the expense of compatriot Rafael Nadal. 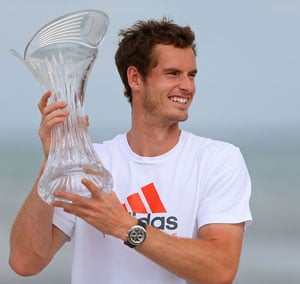 Andy Murray's razor-thin victory over David Ferrer for the Miami Masters crown will send the Scot to No. 2 in the world rankings for the second time in his career, but he was too tired to celebrate on Sunday.

Murray rallied after a slow start in the opening set and survived a Hawk-Eye replay call at match-point down in the final set to subdue Spain's Ferrer 2-6, 6-4, 7-6 (7/1) in a punishing match in the heat and humidity of Key Biscayne.

Ferrer was stricken by cramps in the final-set tiebreaker, while Murray opted not to receive treatement on a tweaked ankle just to avoid prolonging the endurance test.

"We were both in the locker room afterwards," Murray said. "I wasn't up celebrating with my team. We were just kind of sitting there, because we're just incredibly, incredibly tired after a match like that."

The 25-year-old Scot captured his first title in the ATP's elite Masters series since he beat Ferrer in Shanghai in 2011.

Since then, he has gone on to claim the Olympic singles gold in front of adoring British fans in London last year and capture the US Open crown.

Sunday's victory takes him back to No. 2 in the world rankings for the first time since 2009.

His rise to the second spot behind No. 1 Novak Djokovic of Serbia will edge Swiss great Roger Federer down, while Ferrer will move back to No. 4 in the world at the expense of compatriot Rafael Nadal.

It will mark the first time since November 10, 2003 that neither Federer nor Nadal has been in the top two.

Murray, who had a chance to move to No. 2 at Indian Wells prior to Miami, said it was a relief to finally get the job done in time to turn his attention to the claycourt season capped by the French Open.

"I was getting asked about it quite a lot, and it's nice just to have been able to do it this week," he said.

"So I don't have to go into Monte-Carlo or Madrid or Rome and kind of be worrying or thinking about that.

"For me it doesn't change a huge amount, but the fact that I'm moving up the rankings is a good sign. I have been winning a lot of matches. My consistency has been better over the last few months. The rankings obviously reflect that.

"So I will try and keep working hard during the clay and hopefully, you know, I can go higher."