The 16-time Grand Slam champion Rafael Nadal needs to win an 11th Monte Carlo title to stay clear of Roger Federer at the top of the world rankings. 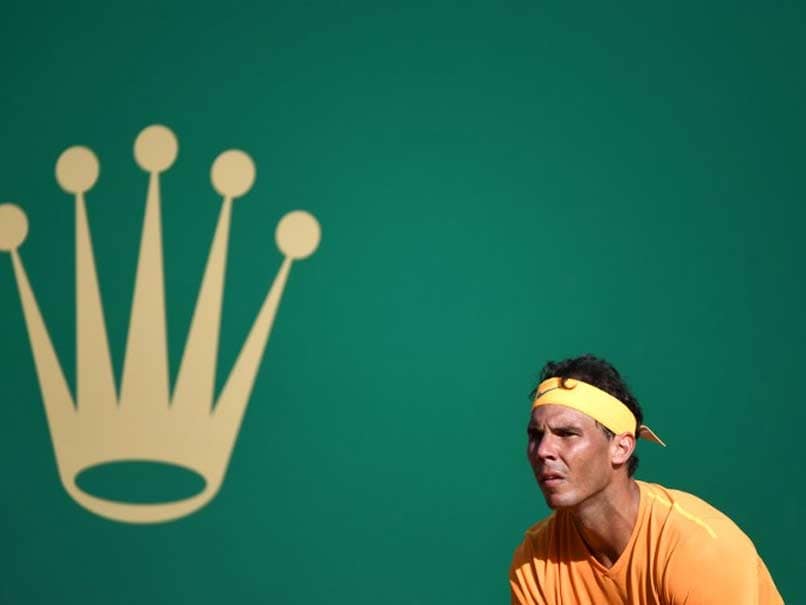 Rafael Nadal is bidding for a record 31st Masters title and 24th on clay.© AFP

World number one Rafael Nadal cruised to a 6-3, 6-2 victory over Russian Karen Khachanov on Thursday to set up a Monte Carlo Masters quarter-final against Dominic Thiem, after the Austrian stunned Novak Djokovic. Nadal needs to win an 11th Monte Carlo title to stay clear of Roger Federer at the top of the world rankings, and the 16-time Grand Slam champion made short work of Khachanov in Monaco. Khachanov held his own at times in the opening set, but Nadal moved through the gears and claimed his second comfortable victory of the week after his opening win over Aljaz Bedene. Thiem should provide a sterner test in the last eight, after the fifth seed came from a set down to beat Djokovic. Nadal has lost twice to Thiem on clay, but produced a dominant display in the French Open semi-finals last year en route to his 10th Roland Garros title.

The 31-year-old wasted no time in making his presence felt on Thursday, breaking to love in the second game as Khachanov felt the brunt of the Spaniard's forehand.

But the big-hitting Russian grew into the match and broke back as Nadal sent a backhand spinning wide.

That was as good as it got though for Khachanov, as Nadal quickly restored his two-game cushion and served out the opening set to love.

Nadal is bidding for a record 31st Masters title and 24th on clay, and he was far too good for his 21-year-old opponent in the second set.

He took the first two games in quickfire time, before breaking again to lead 4-1 with the help of a raking crosscourt forehand.

And Nadal wrapped up a straight-sets triumph with a ruthless smash on his first match point.

The Austrian says he will take confidence from his previous wins against Nadal into Friday's clash.

"It's (a) way better feeling if you go against him and know that you've beaten him already on this surface," said the 24-year-old Thiem.

"But it's the ultimate challenge for everybody, to play against him. I have to rise my level again. I think I'm able to do that."

Former world number one Djokovic has still not reached a quarter-final since Wimbledon last July after struggling with a right elbow injury.

The 12-time Grand Slam champion, now ranked 13, had said he was pain-free in Monte Carlo for the first time in two years, but Thiem backed up his French Open quarter-final win over the Serbian from last year with another impressive victory.

Thiem threw away three set points in the opener, but kept his cool to grind down Djokovic as the Serbian ran out of gas.

The 20-year-old, who won two Masters titles last season, became frustrated in the second set but battled through 6-4, 4-6, 6-4.

Frenchman Richard Gasquet, though, denied Zverev a meeting with his older brother Mischa by seeing off the serve-and-volleyer 6-2, 7-5.

Belgian sixth seed David Goffin held off a late fightback from Roberto Bautista Agut to reach the last eight with a 6-4, 7-5 win, in a match that saw the Spaniard accidentally hit a ball boy with the ball.

Bautista Agut was given a code violation and later fined 2,500 euros ($3,085) for unsportsmanlike conduct.

Goffin will play fourth seed Grigor Dimitrov for a place in the semi-finals in a repeat of last year's ATP Tour Finals final, after the Bulgarian came back from a set and a break down to beat Germany's Philipp Kohlschreiber 4-6, 6-3, 6-4.

Second seed Marin Cilic is also into the last eight, after Milos Raonic pulled out with a right knee injury before their third-round match on Thursday.

Comments
Topics mentioned in this article
Rafael Nadal Dominic Thiem Tennis
Get the latest updates on India vs Australia Series, check out the India vs Australia Schedule for 2020-21 and Ind vs Aus live score . Like us on Facebook or follow us on Twitter for more sports updates. You can also download the NDTV Cricket app for Android or iOS.