Montanes loses in opening round in Brazil

Seventh-seeded Albert Montanes of Spain lost to Filippo Volandri of Italy in the first round of the Brazil Open on Monday. 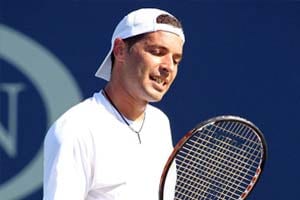 Seventh-seeded Albert Montanes of Spain lost to Filippo Volandri of Italy in the first round of the Brazil Open on Monday.

Volandri needed 65 minutes to defeat the 51st-ranked Montanes in Sao Paulo, converting four of his seven break points to advance to the second round in Sao Paulo.

South America's biggest city is hosting the event for the first time after 11 editions in the northeastern city of Costa do Sauipe. The tournament is now being played indoors because of the rainy weather in Sao Paulo this time of the year.

Comments
Topics mentioned in this article
Tennis Roger Federer Potito Starace Gael Monfils Albert Montanes Carlos Berlocq Robin Haase Nicolas Almagro
Get the latest updates on IPL 2020, check out the IPL Schedule for 2020 and Indian Premier League (IPL) Cricket live score . Like us on Facebook or follow us on Twitter for more sports updates. You can also download the NDTV Cricket app for Android or iOS.