Ferrer was aiming for his fourth title in his home region, but was far from his stubborn best as Youzhny's power and depth of ground strokes proved too much for the number one seed. 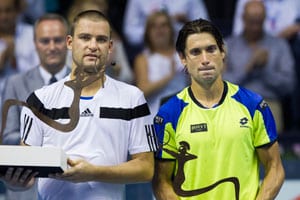 Russian Mikhail Youzhny claimed his second title of the year as he upset home favourite David Ferrer 6-3, 7-5 to win the Valencia Open on Sunday.

Ferrer was aiming for his fourth title in his home region, but was far from his stubborn best as Youzhny's power and depth of ground strokes proved too much for the number one seed.

"I can only thank my team for helping me get to this part of the season and being able to win a tournament," said Youzhny.

"It has been a great week for me and I hope I can keep playing in the same way to finish the year in Paris next week."

However, there was disappointment for Ferrer, who had come through an awkward draw to beat Gael Monfils, Jerzy Janowicz and Nicolas Almagro only to fall at the final hurdle.

"It wasn't the best final for me and even more so at home," said Ferrer.

"I tried my best, it wasn't to be but I really enjoyed my week and the support of the crowd and my team was great."

Youzhny got off to a flying start as he raced into a 5-1 lead in the first set.

Ferrer responded to claim one of the breaks of serve back, but Youzhny held on to serve it out 6-3.

It was roles reversed at the beginning of the second as Ferrer went 4-1 ahead as Youzhny's level dipped slightly.

However, the world number 21 regained his composure and rattled off six of the next seven games to seal his 10th career title.

Comments
Topics mentioned in this article
Tennis David Ferrer Mikhail Youzhny
Get the latest updates on IPL 2020, check out the IPL Schedule for 2020 and Indian Premier League (IPL) Cricket live score . Like us on Facebook or follow us on Twitter for more sports updates. You can also download the NDTV Cricket app for Android or iOS.