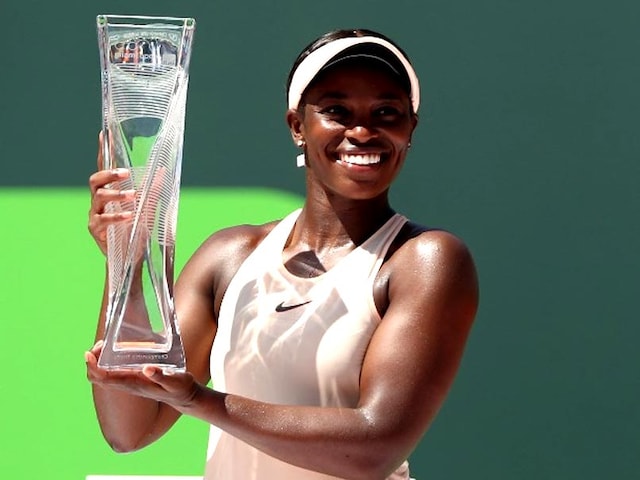 Sloane Stephens has now won all six finals she has competed in.© AFP

Sloane Stephens held her nerve in an error-strewn WTA Miami Open final to beat Jelena Ostapenko 7-6 (7/5), 6-1 and lift the prestigious title for the first time on Saturday. Florida native Stephens, who has now won all six finals she has competed in, had been determined to win the last tournament at Key Biscayne before it moves next year. However a nervy final was not easy on the eye with both players appearing to be struggling to get to grips with the occasion. There were eight breaks of serve in the first set alone -- that total eventually ended up at 12 -- with French Open champion Ostapenko hitting 48 unforced errors compared to US Open champion Stephens making 21 during the entire one hour and 32 minutes.

The triumph for the American, however, capped an impressive campaign which saw victories over grand slam winners Garbine Muguruza, Angelique Kerber, Victoria Azarenka before Ostapenko was also dispatched.

"I knew I would have to run a lot of balls down, you have to accept she will hit great shots so I didn't worry about that too much," said a delighted Stephens, who will be named in the WTA top 10 for the first time when the new rankings are released on Monday.

"There were pre-match jitters but once I won the first set, I was able to settle," she added. "I have wanted to be in the top 10 for so long. It's very exciting."

Stephens endured a terrible slump after winning her first major but has responded superbly and this first Miami title has set up well for the clay challenges ahead.

She added: "I remember when I found out I needed surgery last year after the Australian Open I was so down but ultimately it gave me a different perspective.

"Even when I am down or people are doubting me, there are so many great opportunities out there I didn't worry."

It was the first time either player had made it to the final of a WTA Premier Mandatory event and Ostapenko, at just 20 years and 297 days, was the youngest finalist in Miami since Azarenka won here in 2009.

Ostapenko came into the encounter having not lost a set but the Latvian's efforts were washed away in a sea of errors and an inability to puncture the Stephens defence.

"Sometimes I was being too aggressive when I didn't have to but it was working at the beginning," admitted the world number five, after losing the fourth final of her career despite hitting 25 winners compared to her opponent's paltry tally of just six.

"A final feels different, there was more pressure and I was missing shots I was hitting earlier in the week," she said.

"Now I can prepare for the clay but I have some time before going back to the French Open and to think about what it will be like to defend my title."

There were boos ringing around Crandon Park when tournament director James Blake told the crowd that he would see them next year at the Hard Rock Stadium.

Florida born Stephens loves Key Biscayne and added: "I will miss it and I feel very fortunate to be the last winner here.

"There are so many good things about the tournament - the Iguanas, there is a great pizza place too. Key Biscayne is a hidden gem but I am sure the new place will be great."

Comments
Topics mentioned in this article
Sloane Stephens Tennis
Get the latest Cricket news, check out the India cricket schedule, Cricket live score . Like us on Facebook or follow us on Twitter for more sports updates. You can also download the NDTV Cricket app for Android or iOS.