Miami Open: Ashleigh Barty retained her crown after a 6-3, 4-0 victory over Bianca Andreescu who retired hurt during the second set. 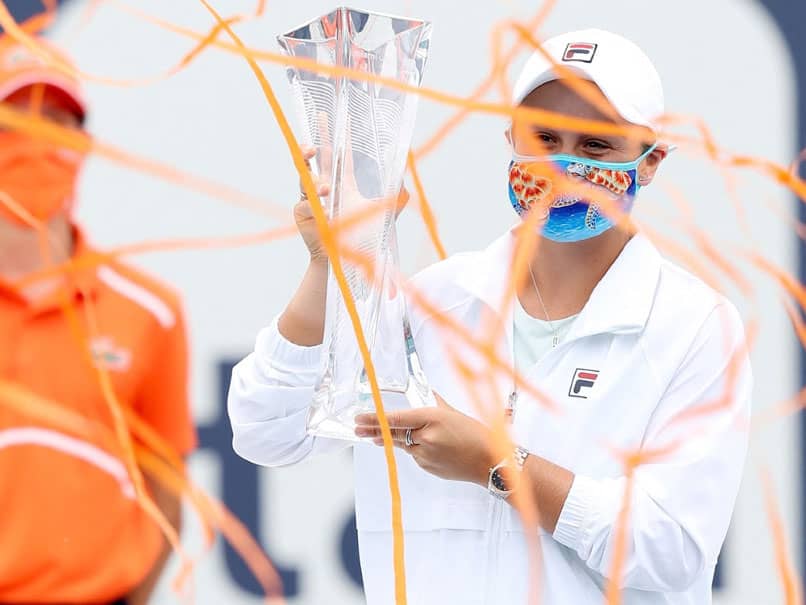 Miami Open winner Ashleigh Barty insisted she is a worthy world number one on Saturday after defeating Bianca Andreescu to retain her crown. The 24-year-old Australian star served notice of her determination to be a force this season with a 6-3, 4-0 victory as Andreescu retired with a foot injury in the second set. Barty, assured of holding on to her No.1 ranking before Saturday's final, had faced sniping from some players over her continued presence at top spot.

The Queenslander has benefited from a tweak into the way rankings are calculated which takes into account the disruption caused by last year's pandemic shutdown. However, Barty shrugged off the criticism on Saturday following her Miami win, rejecting a suggestion that her latest title "proved" she deserved her No.1 status.

Congratulations to World No.1 Ash Barty on her 2nd #MiamiOpen title! pic.twitter.com/MMxu1jqFQA

Barty said: "I never have to prove anything to anyone... I know all the work that I do with my team behind the scenes... I know there has been a lot of talk about the ranking, but I didn't play at all last year and I didn't improve any of my points whatsoever."

"Yes, I didn't drop, but I didn't improve any. I didn't play any at all. There were girls who had the chance to improve theirs, so I felt like I thoroughly deserve my spot at the top of the rankings."

Barty, the 2019 French Open champion, has held the No.1 ranking since September of that year, despite skipping the rescheduled US and French Opens in 2020 to remain in Australia.

"The year we had in 2019 was incredible, incredible for us, and, you know, to be able to build on that now since the restart for us has been great... We come out here and do the best that we can regardless of what anyone is saying. So I never feel like I have to prove anything to anyone."

Barty added that she was unfazed by critics who have suggested that Naomi Osaka, winner of last year's US Open and this year's Australian Open,  was more deserving of No.1 status.

She added: "Everyone is entitled to their own opinion. That's absolutely fine. I can't control what anyone else thinks or what anyone else says. I feel like we deserve to be top of the rankings."

"It doesn't ever really get to me. I mean, it's just what people say and I can't change their opinion, so it doesn't stress me out at all."

Barty, who opted to remain in Australia last year after the WTA season resumed following the pandemic shutdown, is now looking forward to a crowded schedule. She will play the WTA event in Charleston next week as part of preparations for the European clay court season where she will play in Madrid, Stuttgart and Rome before aiming to regain her French Open title at Roland Garros.

Barty remembered her performances in 2019 and said:

"In 2019 throughout each week that I played, I felt like I got better and better on the clay and obviously grew in confidence and grew in experience... If it turns out we have a great clay court season, that's fantastic, and if we don't, then it's not the end of the world."