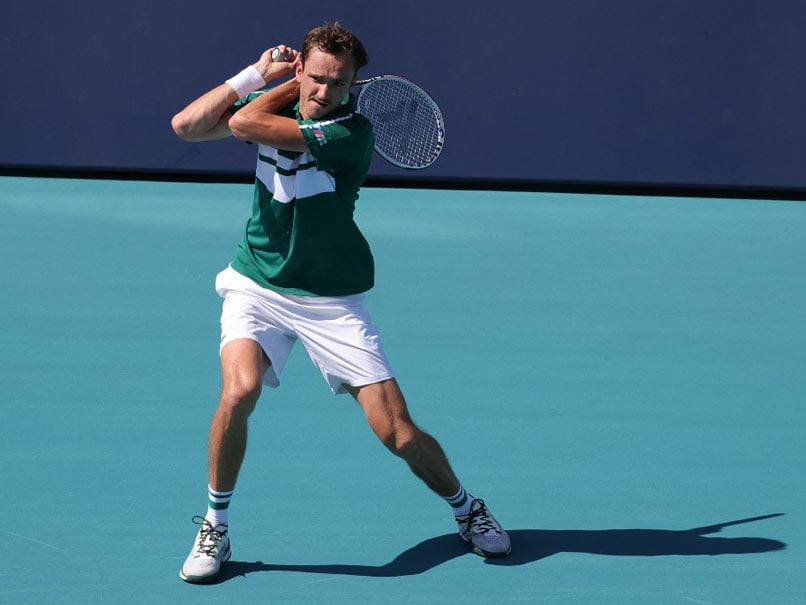 Daniil Medvedev celebrated his rise to second in the world with a seamless entry into the Miami Open on Friday, trouncing Taiwan's Lu Yen-Hsun in less than an hour. Russia's Medvedev needed just 56 minutes to subdue Lu 6-2, 6-2, firing nine aces with just one double fault as he advanced to a third-round meeting with Australian Alexei Popyrin, a 6-4, 6-2, winner over 30th-seeded American Reilly Opelka. Women's world number two Naomi Osaka, seeded second behind top-ranked Australian Ashleigh Barty, had a tougher time, but conquered her nerves in her first match since winning the Australian Open to beat Aussie Ajla Tomljanovic 7-6 (7/3), 6-4.

Medvedev, the top seed in an ATP Masters event for the first time, was all over Lu from the opening game.

He belted 24 winners to become the second player -- along with compatriot Andrey Rublev -- to reach 15 match wins this year.

Runner-up to top-ranked Novak Djokovic at the Australian Open, Medvedev ascended to No. 2 in the world when he lifted the ATP trophy in Marseille.

Medvedev became the first player outside the "Big Four" of Djokovic, Roger Federer, Rafael Nadal and Andy Murray to rank second in the world since Lleyton Hewitt in 2005.

But he's already looking for more.

"The only thing I feel like when you reach something you haven't done then straight away it doesn't matter and you want to go further and further," he said. "I think it's the same for everybody.

"I'm happy about my achievement but only trying to improve every day and want to go further."

Zverev also arrived in Miami riding a wave of success, having captured the ATP title in Acapulco last week.

But Ruusuvuori, 21, rallied to claim one of the biggest wins of his career, turning the tables on Zverev with more aggressive tactics in the second set and posting the second win of his career over a top-10 player.

"I don't even know myself," he said of how he managed the reversal. "I wasn't feeling very comfortable in the first set and I was making a lot of unforced errors. But slowly in the second I was starting to feel a bit better."

Osaka acknowledged she was feeling some nerves in her first match since she lifted her fourth Grand Slam title in Melbourne.

"I would say what I'm most proud of today, just being able to handle my nerves," she said.

That was a bigger problem than the gusty wind on Grandstand Court at Hard Rock Stadium, where 77th-ranked Tomljanovic twice went up a break in the opening set but despite an impressive display of power was eventually undone by 24 unforced errors.

Thirteen aces among her 36 winners helped Osaka overcome a slew of unforced errors of her own and set up a third-round meeting with Serbian qualifier Nina Stojanovic, who surprised Yulia Putintseva, the 26th seed from Kazakhstan, 5-7, 7-5, 6-2.

"I served really well when I needed to," Osaka said. "Unfortunately I got broken a couple of times, but I think when it really, really mattered, I was able to serve well, so I'm happy with that.

Comments
Topics mentioned in this article
Daniil Medvedev Naomi Osaka Alexander Zverev Tennis
Get the latest updates on IPL 2021, check out the IPL 2021 Schedule and Indian Premier League Live Score . Like us on Facebook or follow us on Twitter for more sports updates. You can also download the NDTV Cricket app for Android or iOS.