Murray will face Italian Andrea Seppi in the fourth round, the 16th seed having beaten experienced Brazilian Thomaz Bellucci 7-5, 4-6, 6-2. 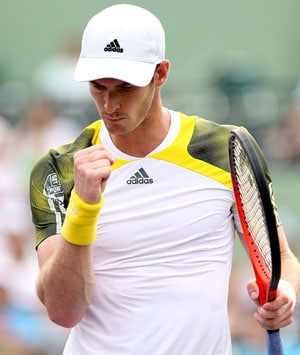 Reigning US Open champion and second seed Andy Murray blasted nine aces en route to a 7-6 (7/3), 6-3 victory over Bulgarian Grigor Dimitrov in the third round of the Miami Masters on Monday.

Murray, who won this event four years ago, needed one hour and 54 minutes to oust the 29th seeded Dimitrov.

Last year's runner-up to Novak Djokovic would have faced a tougher task had not the 21-year-old lost his composure when serving for the first set at 5-3.

Dimitrov double faulted three times to allow Murray to break back and the doughty Scot duly got the better in the tie-break.

It is the second time in as many tournaments that Dimitrov has cracked when serving for a set against a top-ranked player, serving up four double faults when he led world number one Djokovic 5-3 in the third round at Indian Wells.

Murray, who committed 22 unforced errors to Dimitrov's 38, will face Italian Andrea Seppi in the fourth round, the 16th seed having beaten experienced Brazilian Thomaz Bellucci 7-5, 4-6, 6-2.