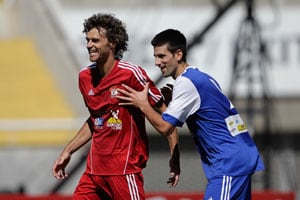 The exhibition was organized by Djokovic's fellow Serbian, Dejan Petkovic, who starred for several Brazilian clubs in the past decade. Former Brazil stars Zico and Bebeto were among the participants.

The 3-3 tie was played at Engenhao stadium before Brazilian league champion Fluminense lost 2-0 to Cruzeiro. Fluminense lifted the league trophy after the match, its first at home since clinching the title last week.

Djokovic joined Kuerten to open a public tennis court in the Rocinha shantytown on Friday. On Saturday, the Brazilian defeated the top-ranked player in a tennis exhibition.

Comments
Topics mentioned in this article
Tennis Novak Djokovic
Get the latest updates on IPL 2021, IPL Points Table , IPL Schedule 2021 , live score . Like us on Facebook or follow us on Twitter for more sports updates. You can also download the NDTV Cricket app for Android or iOS.