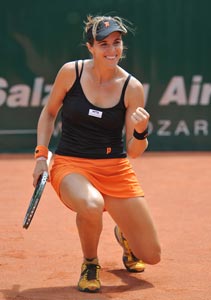 The 54th-ranked Spaniard is now 4-1 in finals after also winning in Bogota and Bastad in 2009 and Rome last year. All her victories have been on clay.

"It's a really good step for me to play a lot of matches in the same week and build my confidence," Martinez Sanchez said.

"At the start I was playing almost a hundred percent perfectly. It's normal to have a bit of difficulty after such a good start, but I stayed calm all the time until the end, and that's why I won."

The 109th-ranked Mayr-Archleitner, who trashed the 8th-seeded Ksenia Pervak 6-0, 6-0 Saturday to reach her first career WTA Tour final, won just four points on serve and nine in total in the opening set.

The 28-year-old Martinez Sanchez, playing her first final this season, had nine aces and won the first seven games. However, she found herself 4-1 down in the second after dropping serve twice.

She saved six more break points to win six of the next seven games as her opponent seemed to struggle with the strong winds, which hampered her throw at serving.

Reaching the final means Mayr-Archleitner, who was a career-high 70th two years ago, will return into the top 100 when rankings are updated on Monday.

Comments
Topics mentioned in this article
Tennis Maria Jose Martinez Sanchez
Get the latest Cricket news, check out the India cricket schedule, Cricket live score . Like us on Facebook or follow us on Twitter for more sports updates. You can also download the NDTV Cricket app for Android or iOS.