Hingis consistently showed the deft hands that made her a nine-time Grand Slam doubles champion. The 32-year-old is scheduled to play doubles with Hantuchova in four tournaments, including the U.S. Open. 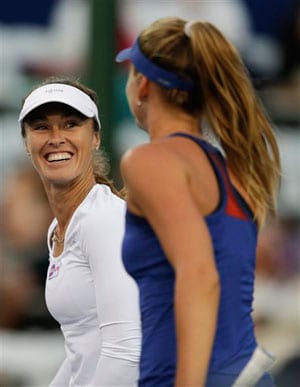 Martina Hingis won on Wednesday night in her return to the WTA Tour, teaming with Daniela Hantuchova for a 6-1, 6-1 victory over Julia Goerges and Darija Jurak in the Southern California Open.

The five-time Grand Slam singles champion frequently flashed a smile as she and Hantuchova overwhelmed their opponents. The pair hugged after Hingis' lob shot over Jurak's head sealed the first-round match.

Hingis is scheduled to play doubles with Hantuchova in four tournaments, including the U.S. Open.

Hingis has retired twice previously, the first time in early 2003 at 22 and the last time in November 2007.