Erakovic confidently raced to a 6-1 first-set victory, and the title was hers when the struggling Lisicki retired. 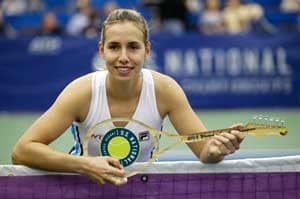 Marina Erakovic became the first New Zealander since 1989 to win a WTA title on Saturday, lifting her first career trophy with a truncated triumph over third-seeded German Sabine Lisicki in Memphis.

Erakovic confidently raced to a 6-1 first-set victory, and the title was hers when the struggling Lisicki retired.

The big-hitting German had been battling an undisclosed illness for several days.

In men's action in this combined ATP and WTA event, fifth-seeded Kei Nishikori of Japan advanced to Sunday's final after a short day's work. He had won the first set against Marinko Matosevic 6-4 when the Australian retired with a bone bruise on the bottom of his right foot.

"He was playing well from the beginning," Nishikori said. "It's lucky for me to play just one set and feel fresh for tomorrow."

Erakovic, who was runner-up to Sofia Arvidsson in Memphis last year, fired four aces and converted both of her break point opportunities in racing through the first set in 27 minutes.

Her run to the championship match had included a second-round revenge victory over Arvidsson. While she was sorry the match didn't go the distance she still savored her first WTA crown, which she said she planned to celebrate by going sky-diving with her coach.

"This is my first title and unfortunately it did go like this," she said. "But Sabine congratulations .... I hope we really do play a lot more finals in the future."

Lisicki offered apologies to the fans.

"I'm sorry that I wasn't able to finish the match," she said. "I was sick the last few days... I just couldn't do better today. Marina played a great match."

The last New Zealander to win a WTA title was Belinda Cordwell in Singapore in 1989.

Comments
Topics mentioned in this article
Tennis Andy Roddick Marina Erakovic
Get the latest Cricket news, check out the India cricket schedule, Cricket live score . Like us on Facebook or follow us on Twitter for more sports updates. You can also download the NDTV Cricket app for Android or iOS.