Maria Sharapova could face a lengthy ban from the International Tennis Federation, possibly ending her season and preventing her from competing for Russia at the Rio Olympics. She confirmed failing a dope test at Australian Open. 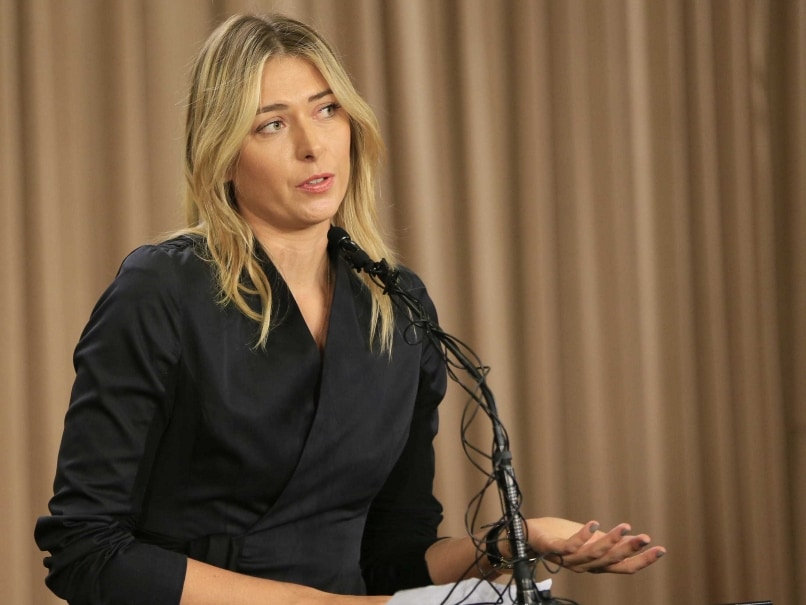 Maria Sharapova admitted she had been taking the drug since 2006.© AP
Los Angeles:

Maria Sharapova's tennis career and Olympic hopes are in jeopardy, and she claims it's all because she failed to click on a link in an email that would have told her to stop taking meldonium.

The five-time major champion says she failed a doping test at the Australian Open in January for the little-known drug, which became a banned substance under the WADA code this year. The former world No. 1 took "full responsibility" for her "huge mistake" when she made the announcement at a news conference Monday in Los Angeles.

Sharapova could face a lengthy ban from the International Tennis Federation, possibly ending her season and preventing her from competing for Russia at the Rio Olympics.

"I know that with this, I face consequences," Sharapova said. "I don't want to end my career this way, and I really hope I will be given another chance to play this game."

The 28-year-old Sharapova received notice last week that she tested positive for meldonium, a blood flow-promoting drug she has been taking for 10 years for numerous health issues. Meldonium was banned because it aids oxygen uptake and endurance, and several athletes across international sports have already been caught using it.

'Let my fans down'

Sharapova and all players were notified of the changes in the WADA banned substances list in December. Sharapova claimed she simply missed the change, neglecting to click on the link.

"I take great responsibility and professionalism in my job, and I made a huge mistake," Sharapova said. "I let my fans down. I let the sport down that I've been playing since the age of 4, that I love so deeply."

Meldonium, also known as mildronate, is a Latvian-manufactured drug popular for fighting heart disease in former Soviet Union countries. Meldonium treats ischemia, or lack of blood flow, but can be taken in large doses as a performance-enhancer.

Sharapova said she began taking meldonium for "several health issues I had back in 2006," including a magnesium deficiency, regular influenza, "irregular" heart test results and early indications of diabetes, of which she has a family history.

Sharapova's penalties could range from a multiyear ban to a minimal sanction with no suspension if officials believe she made an honest mistake. WADA President Craig Reedie told The Associated Press that any athlete found guilty of using meldonium would normally face a one-year suspension.

The ITF's anti-doping program announced in a statement that Sharapova will be provisionally suspended starting this weekend while her case is examined. WADA spokesman Ben Nichols said the organization won't comment until the ITF makes a decision.

Sharapova and her attorney, John J. Haggerty, declined to say where Sharapova was put on the drug or where she gets it now, citing the ongoing process with the ITF. Meldonium is not approved by the U.S. Food and Drug Administration.

"I understand the drug is sold particularly in Eastern Europe," Reedie told the AP in a telephone interview. "You can almost get it over the counter. For stronger versions, you might need a prescription. There has been a whole rash of these cases since the 1st of January when it appeared on the banned list. This might not be happening if athletes would be taking more care of the things that are on the list."

Although she has lived in the U.S. since childhood, Sharapova won a silver medal and served as Russia's flag-bearer at the London Olympics four years ago.

"I think it's all nonsense," Shamil Tarpshchev, the president of the Russian Tennis Federation, told the state Tass agency. "Athletes take what they're given by physiotherapists and doctors. I think that Sharapova will play at the Olympics anyway. But we have to see how events develop."

Sharapova said she took the test shortly before she lost to Serena Williams in the Australian Open quarterfinals on January 26. Sharapova hasn't played since then while recovering from a forearm injury, and she had already dropped out of the BNP Paribas Open in Indian Wells, which begins this week.

"She is very organized and she takes her career very seriously," Haggerty told the AP. "When she first started to take this back in 2006, she made sure it was approved, that it wasn't on the banned list, and checked in future years. Because she had taken it for so many years, and it was OK year after year, it just got off the radar.

"When she got the letter, she was shocked, completely stunned. She takes great pride in her integrity and how she approaches the game, and she immediately wanted to come forward and take responsibility."

Sharapova is one of the greatest players of her generation, with 35 career singles titles and over $36 million in career earnings. She is currently No. 7 in the WTA rankings after playing just three tournaments and the Fed Cup final in the last eight months since Wimbledon due to injuries.

Sharapova is thought to be the world's highest-paid female athlete due to endorsement deals and her extensive business ventures, including a high-profile candy line, Sugarpova. Forbes estimated her earnings at $29.5 million for 2015.

"I am very saddened to hear this news about Maria," WTA CEO Steve Simon said in a statement. "Maria is a leader and I have always known her to be a woman of great integrity. Nevertheless, as Maria acknowledged, it is every player's responsibility to know what they put in their body and to know if it is permissible."

Sharapova was born in Russia before moving to Florida. She lives primarily in Los Angeles now.

The star had a moment of levity when she acknowledged the incorrect assumptions about the reason she had called a news conference.

"If I was going to announce my retirement, it wouldn't be in a downtown Los Angeles hotel with this fairly ugly carpet," she said.