Former world number one and double Grand Slam title winner Marat Safin on Thursday became the latest Russian tennis player to confirm he intends to run for his country's parliament. 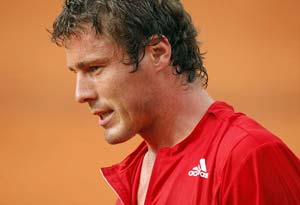 Former world number one and double Grand Slam title winner Marat Safin on Thursday became the latest Russian tennis player to confirm he intends to run for his country's parliament.

Safin, the 2000 US Open winner and 2005 Australian Open champion, said he was serious about his political ambitions.

"I am running for Federal Parliament in Russia," Safin told www.atpchampionstour.com.

"The elections are on December 4th so I will find out soon. It's a new challenge. I think I am an intelligent guy and I have a lot to bring and a lot of ideas about things and what to do. I am very committed to it."

Safin added: "I could be the best looking guy in the Duma, but that's only because all the other guys are over 60."

The 31-year-old Safin is the second Russian tennis star to target a seat in the Duma following 2007 US Open women's semi-finalist Anna Chakvetadze's announcement in September that she was to stand for the Right Cause party.

The 24-year-old, formerly ranked in the top five in the world, has not played since Wimbledon in June because of poor health.

Chakvetadze said she wanted to "try something new" and focus on women's rights and children's sports.

"I joined the Right Cause Party because it's a young party," she said. "All of its members are young people, who have many fresh ideas. I believe I also can bring some fresh ideas into this project.

"I'd like to be involved in deciding the questions concerning the sports sphere in case we manage to enter the State Duma."

Comments
Topics mentioned in this article
Tennis Anna Chakvetadze
Get the latest updates on ICC T20 Worldcup 2022 and CWG 2022 check out the Schedule, Live Score and Medals Tally. Like us on Facebook or follow us on Twitter for more sports updates. You can also download the NDTV Cricket app for Android or iOS.