Tommy Haas, at 37, is the oldest men's singles player at US Open 2015. Is there an urgent need for someone as talented - or perhaps even more - to emerge from USA? 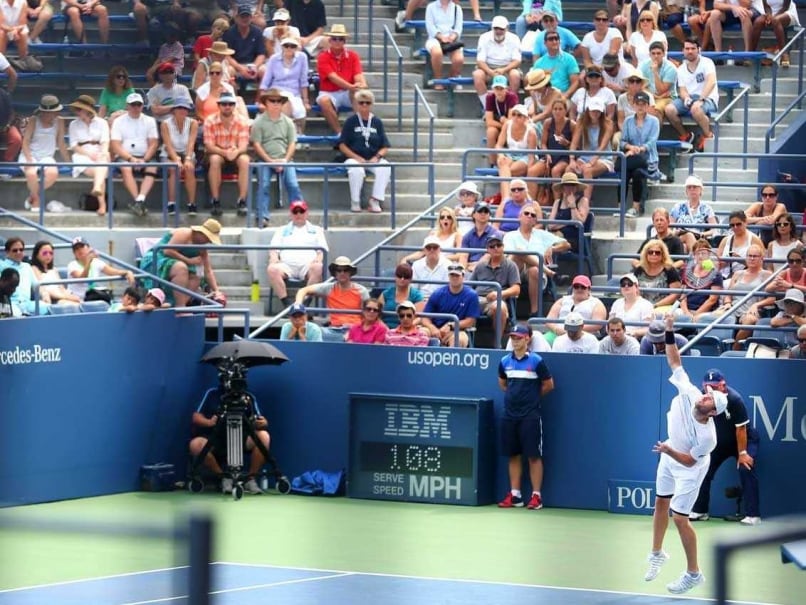 He was not talking about what it might take for an American man to contend soon for a U.S. Open championship, much less win it.

Click on the accompanying link, and there is Haas, at 37 the oldest man in this year's men's draw at the Open, in a photograph with the Republican presidential candidate Donald J. Trump.

The photo is from a meeting four years ago, Haas said Monday. Given Trump's current standing in the Republican race, Haas decided to show the picture to his followers (his good friend Roger Federer among them) and play social media provocateur.

"Some of the responses were quite interesting," Haas said. One in English hoped this was Haas' idea of dark comedy.

Haas being a dual citizen of his native Germany and the United States since 2010, his actual take on Trump sounded more European than American. In other words: What the heck?

"To see what's going on in the press and just thinking that the presidential election is not for another 16 months, sometimes you wonder what's going on," Haas said. "There's not anything else to talk about, with all the things that are going on in Europe and other places? I mean, I also find him very entertaining, but I guess he gets away with a lot at the moment.

"But because he has no experience in politics, I can't see him going all the way."

With a 3-6, 6-1, 6-7 (3), 6-3, 6-1 loss to the Spaniard Fernando Verdasco, Haas' 17th and possibly last U.S. Open ended Monday as all the others did, short of a title. But he is at least the kind of immigrant whom Trump - a tennis fan and frequent Arthur Ashe Stadium luxury suite inhabitant - would probably not dismiss as a loser.

Haas has earned a more than respectable $13 million in prize money since turning pro in 1996, along with 15 ATP Tour titles. He has made three semifinal appearances at the Australian Open and one at Wimbledon, as well as three U.S. Open quarterfinal runs, and he was ranked No. 2 in 2002.

Perhaps with an asterisk, he was the most credentialed American in the 128-player men's field at this U.S. Open, despite being ranked 506th because of a right shoulder operation that left him sidelined for more than a year for the third time in his career and limited him to eight matches this summer.

That was not quite enough preparation, Haas agreed, for a grinder like the 31-year-old Verdasco - also in career descent, if not yet twilight - over 2 hours 44 minutes in hot, humid conditions.

"Lost a lot of gas out there, obviously," Haas said.

At Court 5, in the shadow of Ashe, the crowd was decidedly pro-Haas, in appreciation of his versatile all-courts game, his classicÂ  one-handed backhand and his subtly expressed grit. You might call Haas a poor man's Federer, that $13 million notwithstanding.

On top of that, Haas displayed the casual look of his adopted nation. He wore his baseball cap backward, like the 18-year-old American Tommy Paul, this year's French Open junior champion, who dropped a 6-4, 6-0, 7-5 decision to the Italian Andreas Seppi on the adjacent Court 6.

For the record, Verdasco and Seppi wore their caps frontward, sartorial symbolism reflecting the state of the American men's game in relation to a thoroughly dominant Europe.

It is no secret that the American men have gone in reverse since Andy Roddick won the U.S. Open in 2003. The competition cavity keeps getting deeper and will probably not be filled soon despite a number of promising teenagers, among them Paul, Frances Tiafoe, Taylor Harry Fritz and Jared Donaldson.

"Should be some exciting times ahead," Haas said.

How much the American tennis audience - especially at the major hardcourt tournaments, including the Open - is holding its breath is a matter of discussion. When Pete Sampras was accumulating a then-record 14 major championships, he was often lamented as too boring. When Federer beat Roddick in the 2006 Open final, the New York crowd was more enamored of Federer's on-court elegance than dismayed by the home country's defeat.

The argument can be made that tennis stars are part of a more globally interconnected sports culture and that the majority of the upscale fan base is less interested in jingoistic passions.

Increasingly, we see rising stars from various countries who are the children of immigrants. The parents of Tiafoe, possibly the most promising of the next generation, came to the United States from Sierra Leone.

"Of course it matters," Haas said of the American men's drought, comparing it to a similar Grand Slam title decline in Germany since the days of Boris Becker. "We all know that when you are a citizen of your country, you want players to look up to. That'll never change.

"But we are also fans of a lot of different people because of how connected we are. Because of social media, you get to follow players on Facebook, Instagram or Twitter. You feel like you're very close to them, wherever you are, wherever you live."

Haas lives in Bradenton, Florida, and Los Angeles, but if the end of his Grand Slam career is upon him - and that will depend on his results ahead, he said - he will have left his heart in New York.

The memories are many: a night match at Ashe against the great Sampras during Sampras' 2002 title run, a career punctuation point; matches against Marat Safin and James Blake that ended in fifth-set tiebreakers; the heartbreak of three quarterfinal-round defeats.

"With the history of my body, who knows if I can make it back?" Haas said. "But it's been a great run, a privilege."

Comments
Topics mentioned in this article
Tommy Haas Tennis
Get the latest updates on IPL 2021, IPL Points Table , IPL Schedule 2021 , live score . Like us on Facebook or follow us on Twitter for more sports updates. You can also download the NDTV Cricket app for Android or iOS.