Sharapova will compete in her first Madrid final after beating Serbian Ana Ivanovic 6-4, 6-3 while Williams sealed her place as she overcame seventh seed Sara Errani 7-5, 6-2 on Saturday. 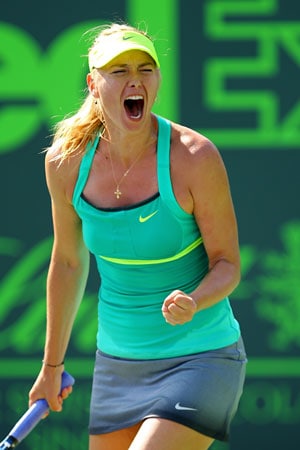 The world's two top female players, Serena Williams and Maria Sharapova, will battle it out for the number one ranking when they meet in the Madrid Open final on Sunday after both came through Saturday's semi-finals in straight sets.

Current number one Williams sealed her place in the final in the Spanish capital for the second consecutive year as she overcame seventh seed Sara Errani 7-5, 6-2 on Saturday.

Williams was first to book her place in the final as she edged a close first set when she broke in the 12th game before comfortably taking the second to progress in just over 90 minutes.

And the 15-time Grand Slam champion was happier with her performance against the Italian than the error-strewn display she produced against Spanish wildcard Anabel Medina Garrigues in the quarter-finals.

"I feel that I played solid. In the second set more than the first I made a few less errors, which was something that I needed to do," she said after the match.

The 2012 Madrid champion insisted she believes she is the world's best player and is dead set on retaining her status as number one to prove it.

"I try not to pay too much attention. I always just try to play my game. You're playing players who you know their strengths and weaknesses.

"Obviously I love being number one. In my heart I feel I'm number one, but also I love to win tournaments.

"So I think if I just win as many tournaments as I can then I'll continue to be number one."

Sharapova, though, has the chance to dethrone Williams at the top of the rankings should she manage a first victory over the 31-year-old in nine years on Sunday.

The French Open champion has yet to drop a set this week and after a tight start she began to unleash her powerful ground strokes with some authority towards the end of the first set, culminating in a second break of serve which allowed her to take it 6-4.

Ivanovic responded by breaking straight away in the second, but Sharapova roared back and broke in consecutive games to turn the set around and ease into her fourth final in her last four events.