World No.2 Maria Sharapova, who has yet to drop a set, continued her stroll into the quarter-finals as she overcame Sabine Lisicki 6-2, 7-5. 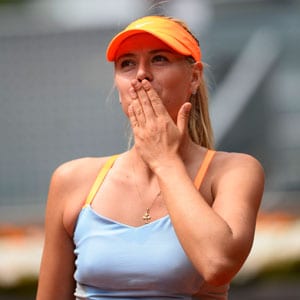 World No.1 Serena Williams cruised into the Madrid Open quarter-finals as she dismantled 13th seed Maria Kirilenko 6-3, 6-1 in just an hour and four minutes on Thursday.

Williams didn't even face a break point during the match as she steamrollered the Russian, dropping only one more game from 3-3 in the first set.

The second set was straight forward for the 15-time Grand Slam champion as she raced into a 5-0 lead and then served out in style to book her place in the quarters, where she will face Spaniard Anabel Medina Garrigues.

And Williams believes taking some pace off her serve to get a higher percentage of first serves into court helped her relax and play more fluently than in her earlier rounds.

"I've just been missing a little bit of my serve when I was hitting it harder, so I took some pace off and just didn't hit it as hard as I usually do," she said.

"It was better today. I just felt really relaxed today. I felt like I was just taking my time so hopefully I can keep calm and relaxed."

The American is unbeaten on clay in eight matches so far this season, but after a similarly positive start to last season on the clay was followed by shocking loss in the first round of the French Open, she says she has learned not to get overconfident ahead of Paris, where she will head at the end of this month.

"I think more than anything I learned not to become overconfident.

"I think I'll just take that with me to the French this year. I think I was a little confident last year and I felt really good; this year I'm going to take every moment like it's my last."

World No.2 Maria Sharapova, who has yet to drop a set, continued her stroll into the quarter-finals as she overcame Sabine Lisicki 6-2, 7-5.

The Russian, who could overtake Williams at the top of the rankings should she win the title this week, broke the German's serve four times to prevail in a disjointed opening set.

Serve was more dominant in the second set with both players exchanging just the one break early on before Sharapova secured a crucial second break at 5-5 and served it out to take her place in the last eight.

And the reigning French Open champion believes her game on the clay is rounding into shape nicely as she prepares to begin the defence of her title.

"I think when you win a Grand Slam on a surface, it would be pretty mean of me to say that I'm not comfortable on the surface," she told a press conference on Thursday.

"It took me many years to get to the level of where I am today. It certainly didn't happen overnight.

"I worked extremely hard on getting stronger and recovering better, moving better on the court, giving myself a better position on the court, especially after being on the defensive and trying to play aggressively as I always do on quicker surfaces.

"Winning the French Open was an incredible memory and one that I'll have for the rest of my life.

"Sometimes when you feel like you have everything or you won everything, it can be pretty easy to just say, why do I need it again? But I find a lot motivation in going back and trying to defend my title.

"Over the years, it's brought me a lot of great memories and a lot of tough ones. I did win last year but years before I had tough losses there as well."

Comments
Topics mentioned in this article
Tennis Mahesh Bhupathi Mark Knowles Roger Federer Rafael Nadal Novak Djokovic Samantha Stosur Maria Sharapova
Get the latest updates on ICC T20 Worldcup 2022 and CWG 2022 check out the Schedule, Live Score and Medals Tally. Like us on Facebook or follow us on Twitter for more sports updates. You can also download the NDTV Cricket app for Android or iOS.