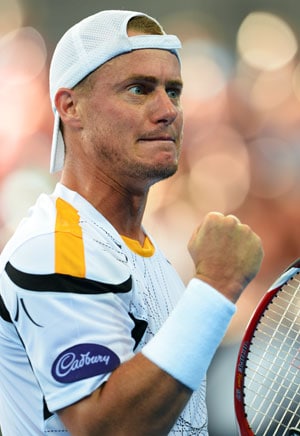 Hewitt, bidding to recapture the title he lifted in 2011, reeled off six consecutive points in the third set tie-break after world number 15 Raonic seized a 3-0 lead.

The 31-year-old former world number one sealed victory on his second opportunity after Raonic had saved a match point with an ace.

Hewitt will be playing in a record 17th straight Australian Open when the first major of the season starts on Monday.

And the former Wimbledon and US Open champion, who has slipped to 82nd in the world rankings, is happy to be competing pain-free after several years of foot and toe problems.

"I feel mentally fresh and just excited to be playing without pain," said Hewitt. "The last few years have been frustrating, trying to play with injuries.

"I'm amazed at how many Opens I've played, but I don't focus on the record -- it only makes me think how old I am. But when I retire I'll be pretty proud of it."

Hewitt said he had enjoyed some luck during the tie-break.

"I just had to guess on his serve and I had some luck in the breaker. He has one of the biggest serves in the game and I had to be hanging there and wait for my opportunities.

"When I was down in the tie-breaker I was able to play some good points," he added.

"It was a tight match to start the year, I tried to play the best I could. The weather was sometimes horrible to play in with the wind and the sun," said del Potro.

"But this is a very good chance to prepare for the Australian Open."