Julien Benneteau, 32, advanced with a 6-1, 6-2 victory over the former top-ranked Lleyton Hewitt. He had to adjust on the fly after the second rain delay, which lasted two hours. 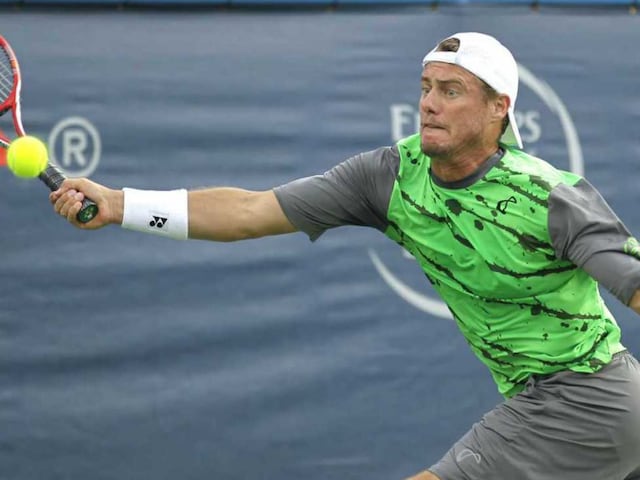 Lleyton Hewitt of Australia reaches for the ball during a game against Milos Raonic, of Canada, at the Citi Open tennis tournament, Thursday, July 31, 2014, in Washington.© AP
Toronto:

Lleyton Hewitt and Julien Benneteau had to deal with two rain delays during their Rogers Cup match on Monday before the Frenchman finally advanced to the second round.

Benneteau, 32, advanced with a 6-1, 6-2 victory over the former top-ranked Hewitt. He had to adjust on the fly after the second rain delay, which lasted two hours.

"I tried to keep the same momentum and the same rhythm of the match," Benneteau said. "I just tried to stay focused to be able to play the same way."

Benneteau was leading 4-1 in the first set when the first brief rain delay occurred. He was up 4-2 in the second when storms moving through the Toronto area halted action across the tournament.

Benneteau also said it's never easy facing Hewitt, even though the Aussie is 42nd now and 11 years removed from being atop the world rankings.

"He's a great fighter and to beat him you have to play solid," Benneteau said. "You have to do a good match. It's the kind of player that if your level is not good enough, you don't win."

The 10th-seeded John Isner was eliminated in his first match for the second straight tournament, losing to Croatia's Ivan Dodig 6-4, 6-7 (4), 6-3.

American served 13 aces to Dodig in the Croatian's first singles match in more than two months because of a broken rib. Isner managed to win a second-set tiebreak to stay alive, but Dodig earned a big break in the third set to grab control again.

The match was originally scheduled for the afternoon in the stadium, but rain wreaked havoc on the day's schedule.

"Obviously it was not easy," Dodig said. "It was long day for us, and of course changing the court it's also a little bit like making you to think about it."

Isner was not made available to reporters.

Earlier, No. 15 seed Marin Cilic also moved on with a 6-2, 4-6, 7-5 win against Denis Istomin. The Croatian said Istomin was dealing with a shoulder injury that led to some unpredictability.

"He had some shots were coming off good, some not, and it was difficult to know what was going to come," Cilic said. "It got a bit complicated."

Cilic will play the winner of a night match between Guillermo Garcia-Lopez and Malek Jaziri in the second round.

The lengthy rain delay caused some changes to Monday's schedule. No. 10 seed John Isner had his afternoon match against Ivan Dodig moved to the grandstand at night.

The Rogers Cup Hall of Fame induction ceremony was also postponed because of the weather. Stefan Edberg and former Rogers Cup Master of Ceremonies Don Goodwin will now be inducted Tuesday night.

Comments
Topics mentioned in this article
Lleyton Hewitt Tennis Julien Benneteau
Get the latest Cricket news, check out the India cricket schedule, Cricket live score . Like us on Facebook or follow us on Twitter for more sports updates. You can also download the NDTV Cricket app for Android or iOS.