Hewitt fell one short of Roger Federer's record 122 wins on grass court as he slumped to a second round exit in the Queen's Club grass-court tournament. 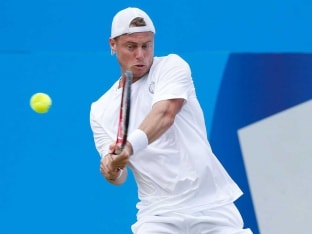 Lleyton Hewitt remains one victory short of Roger Federer's record of 122 match wins on grass after being beaten 6-3, 6-4 by Feliciano Lopez in the second round of the Queen's Club grass-court tournament on Wednesday.

Hewitt, a four-time champion at Queen's, was broken once in each set and failed to earn a single break point against the 10th-seeded Spaniard. It's the first time the Australian has lost to Lopez in their five meetings.

The 33-year-old Hewitt had been bidding to become the first player to win Queen's five times. He shares the record of four titles with Andy Roddick.