Former world number one Hewitt's match was the first on the Stadium court, with Italian Seppi progressing after a straightforward 6-4, 6-2 win to play 17-time Grand Slam champion Federer in the second round. 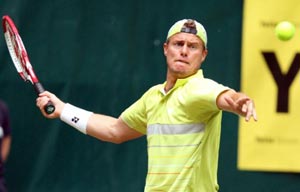 Veteran Lleyton Hewitt crashed out of the Shanghai Masters at the hands of Andreas Seppi on Tuesday, missing the chance to play old rival Roger Federer as organisers scrambled to keep the storm-hit tournament on track.

Persistent rain -- the lingering effects of Typhoon Fitow -- forced matches onto indoor courts at the Qizhong Tennis Centre, with tournament chiefs attempting to make up for lost match time the previous day.

Former world number one Hewitt's match was the first on the Stadium court, with Italian Seppi progressing after a straightforward 6-4, 6-2 win to play 17-time Grand Slam champion Federer in the second round.

Hewitt, 32, who has slipped out of the world's top 50, started strongly, breaking at the first opportunity and taking a 3-0 lead. But Seppi withstood the charge, winning five games in a row to seize the initiative.

The Australian wildcard showed only occasional glimpses of his battling qualities as world number 22 Seppi cut down on his error count and broke Hewitt twice at the start of the second set.

"He played a lot better," said Hewitt. "He hardly missed a ball after the first three games. I had chances to go up four-love. From then on, he played really well. He served better than I've seen him serve before."

"I served in patches. Probably when I was down breakpoints and stuff, I didn't get enough first serves in," added Hewitt. "He's such a tough player to play when the ball is on his terms."

The top eight seeds including Federer, seeded five, all have a bye into the second round of the tournament.

Comments
Topics mentioned in this article
Tennis Samantha Stosur Lleyton Hewitt Roger Federer Novak Djokovic Gael Monfils
Get the latest updates on ICC T20 Worldcup 2022 and CWG 2022 check out the Schedule, Live Score and Medals Tally. Like us on Facebook or follow us on Twitter for more sports updates. You can also download the NDTV Cricket app for Android or iOS.