China's two-time grand slam winner Li Na made her first appearance on court as she inaugurated the new tennis stadium in Wuhan. 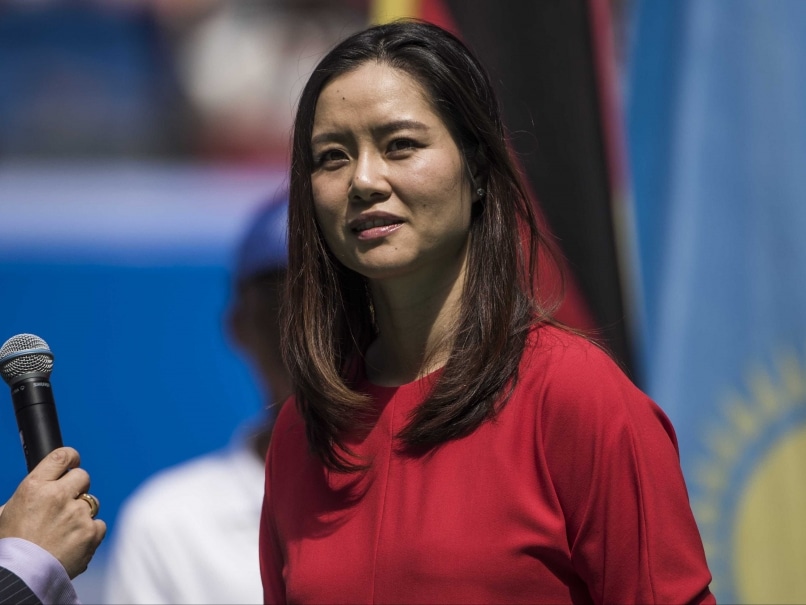 The new stadium has been built on the back of Li's career success -- she was the first Asian to win a Grand Slam singles -- that saw the popularity of tennis surge in China.(Li Na Receives Teary Goodbye at China Open)

Huge applause echoed through the stadium as Li, now retired, stepped onto the court wearing a red dress and was joined by the tournament's defending champion Petra Kvitova to open the new stadium officially.

Similar in capacity to Wimbledon's centre court, the new stadium is dwarfed only by the US Open's Arthur Ashe stadium which has a capacity of 23,000. It has a retractable roof and a metal and glass structure reminiscent of the iconic "bird's nest" stadium in Beijing, the centrepiece of the 2008 Olympics.

Czech Kvitova, the world number four, won the inaugural Women's Tennis Association (WTA) Wuhan Open last year, and is joined for the 2015 edition by 18 of the world's top 20.

"I am very happy to be here again and the stadium looks wonderful and I will try my best to fight for the title," Kvitova said.

She added that Li, who was a close friend when they were both on the circuit, has promised to let her meet her new daughter Alisa, who was born in June. Mention of the baby's name prompted more excited applause from the crowd.

Li, who has rarely appeared in public since retiring and giving birth, said: "One year ago, I came here for the farewell ceremony, now one year later, I'm standing on this court as mother."

During her career, Li famously opted out of China's state sports system and has previously been accused of a lack of patriotism during a sometimes rocky relationship with the domestic press.

But in her home city of Wuhan she is a local hero and has been influential in the WTA tour's growth in Asia.

Li now has plans to open her own tennis academy. "Now it's under preparation, so please be patient," she told the crowd.

The WTA first opened an office in Beijing in 2008, when there were only two events in mainland China.

This year there were 10 professional women's tournaments in China, and 23 in the Asia Pacific region, nearly half of the WTA's 55 annual events.

The Wuhan Open with a $2.4 million purse, is the penultimate qualifying tournament before the WTA Finals in Singapore.

Day one of matches saw China's only two players in the tournaments knocked out.

"Maybe it is because I had high expectations for the tournament. And this time I didn't actually see the match very well. I didn't perform well," Zheng said of her performance.

Elina Svitolina of Ukraine, semi-finalist at last year's Wuhan Open, sailed into the second round with a 6-4, 6-4 win over wild card entrant Daniela Hantuchova of Slovakia.

Comments
Topics mentioned in this article
Petra Kvitova Na Li Tennis
Get the latest updates on T20 World Cup, check out the T20 World Cup Schedule and Live Score . Like us on Facebook or follow us on Twitter for more sports updates. You can also download the NDTV Cricket app for Android or iOS.