French Open champion Li Na of China rallied from a 3-1 deficit in the opening set to beat Russian Maria Kirilenko 6-4, 7-6 (7/4) in the second round of the New Haven Open. 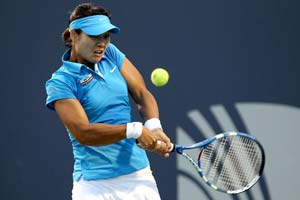 French Open champion Li Na of China rallied from a 3-1 deficit in the opening set to beat Russian Maria Kirilenko 6-4, 7-6 (7/4) in the second round of the New Haven Open.

Li trailed 3-1 in the first set and 4-1 in the second before clinching a berth in the quarter-finals of the final tournament before the start of the US Open in five days.

Li has now beaten Kirilenko in four out of five meetings but she says it doesn't get any easier.

"Everyone thinks different," says Li, the first Asian to win a Grand Slam. "Before (it was), 'Oh, OK, I beat her.' But now, if they win, 'Oh, I beat a French Open champion.' They are even more excited."

Li broke Kirilenko in the seventh game of both the first and second set after falling behind in each.

She next faces Russian Anastasia Pavlyuchenkova, who beat Roberta Vinci of Italy, 6-2, 6-4.

But Medina Garrigues said she might have retired from the match if she had lost the second set.

"I was thinking of that," she said. "But I was lucky. I won the tiebreaker and I won the match."

She will have the knee examined before her next match against Italy's Francesca Schiavone in the quarter-finals.

Marion Bartoli of France also advanced to the quarter-finals with a 6-2, 2-6, 6-1 win over Klara Zakopalova of the Czech Republic.

"I lost to Klara the last two times we played each other. So, it was great for me. It was great for my confidence," Bartoli said. "I'm starting to play a little better than I did in Toronto and Cincinnati. Everything is starting to click together, and that's very good before the US Open starts.

Bartoli will next face Czech qualifier Petra Cetkovska in the quarter-finals.