The world number five booked her place in next month's WTA Championships in Istanbul featuring the top eight women's players. 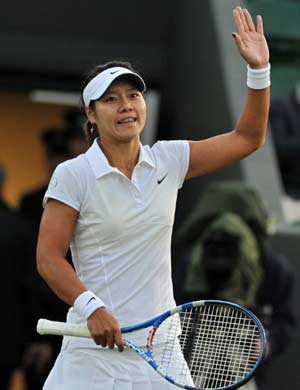 The world number five booked her place in next month's WTA Championships in Istanbul featuring the top eight women's players, the tennis organisation announced on its website.

The 31-year-old's inclusion in the tournament comes after a surge in form which has seen her become the first Asian player to reach the US Open semi-finals earlier this month.

The announcement was made before the 2011 French Open winner had even hit a ball at the China Open, where qualifying matches are currently being played.

Asia's first singles Grand Slam winner has qualified for the WTA Championships for the last two seasons, having finished 2011 ranked fifth and 2012 seventh.

"I'm so happy to have qualified again," Li said, on the WTA's website.

"I had a great time in Istanbul last year and I'm looking forward to coming back and playing my best tennis for the fans in Turkey."

Li is aiming for her biggest win on home soil when she takes on a star-studded field at the dual ATP and WTA event at Beijing's Olympic Park.

Williams, Victoria Azarenka, Maria Sharapova and Agnieszka Radwanska -- the world numbers one, two, three and four -- have already qualified for the WTA Championships.