Speaking to the press in Madrid, she put part of the reason for her excellent form on the work she has been carrying out with coach Carlos Rodriguez, who had previously worked with Belgian star Justin Henin. 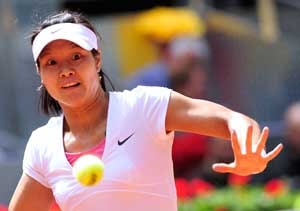 Chinese tennis star Li Na arrives at the Madrid Tennis Masters with a positive frame of mind, and praised her coach for a successful start to the season.

The 32-year-old world number five began the year in fine form as she reached the final of the Australian Open and warmed up for Madrid by reaching the final of the Porsche Tennis Grand Prix in Stuttgart, reports Xinhua.

Speaking to the press in Madrid, she put part of the reason for her excellent form on the work she has been carrying out with coach Carlos Rodriguez, who had previously worked with Belgian star Justin Henin.

"I have been feeling pretty good from beginning of the year," said Li Na, who added that she had been working very hard with Rodriguez and who will be with her in Spain.

"He didn't come with me in Stuttgart, so when I was here, so many people asked me; are you still working with Carlos? And I said, Of course. I was so happy he could come onto my team to coach me.

"I think for me he's not only the tennis coach. I think after I was working with him I feel much stronger in my mind and also much stronger on the court," she said.

She said she pays a lot of attention to Rodriguez's advice.

"I trust him a lot. He was not in Stuttgart, but we have contact by email, text message, so he knew exactly what I did on the court.

"After Stuttgart we had a lot email contacts to prepare what we should do here," she said.

Li looked uncomfortable as the main star of Chinese tennis and was asked whether or not she felt the pressure of that situation, given that she was the highest ranked of the three Chinese players in the world top 100.

"It is something I couldn't change, so I have got used to it," she said, adding that as tennis becomes more popular in her homeland that situation will change.