The Indo-Czech pair lost 3-6 3-6 to Andy Murray and Colin Fleming in the second round. Earlier, Rohan Bopann and Sania Mirza lost their respective matches 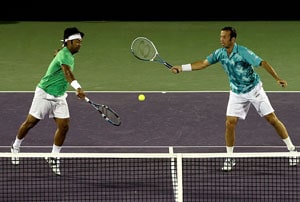 Fourth seeds Leander Paes and Radek Stepanek suffered a second-round defeat at the hands of Andy Murray and Colin Fleming as Indian challenge ended at the Rogers Cup, here.

The Indo-Czech team squandered five break chances as they lost 3-6 3-6 to the British pair in the second round of the USD 2,887,085 hard court event.

Rohan Bopanna and Andre Begemann have already exited while Sania Mirza and her new Chinese partner Jie Zheng also lost in the second round of the WTA event at the same tournament.

Paes and Stepanek had two chances in the first set and three in the second but could convert none. On the other hand, Murray and Fleming capitalised on the chances they got.