Leander Paes and Radek Stepanek had began well but lost 6-1 3-6 5-10 to Jamie Murray and John Peers in the last-eight stage of the euro 468,460 grass court event, a warm up for Wimbledon. 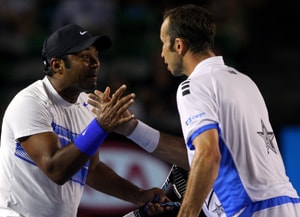 Playing their first tournament together in five months, third seeds Leander Paes and Radek Stepanek suffered an upset defeat against Jamie Murray and John Peers in the quarter-finals of the Aegon International.

The Indo-Czech combination had began well but lost 6-1 3-6 5-10 to British-Australian combination in the last-eight stage of the euro 468,460 grass court event, a warm up for Wimbledon.

It was first time Paes and Stepanek were playing together since competing in Australian Open in January.

A neck injury, which required surgery to heal, had forced Stepanek out of action.

They have been seeded fourth at the Wimbledon.

Comments
Topics mentioned in this article
Tennis Radek Stepanek Leander Paes Jamie Murray John Peers
Get the latest updates on India vs England Series, India vs England , live score and IPL 2021 Auction . Like us on Facebook or follow us on Twitter for more sports updates. You can also download the NDTV Cricket app for Android or iOS.