Leander Paes and Martina Hingis were beaten 3-6 2-6 by the local pair of Sam Groth and Samantha Stosur in a quarterfinal match that lasted 55 minutes. 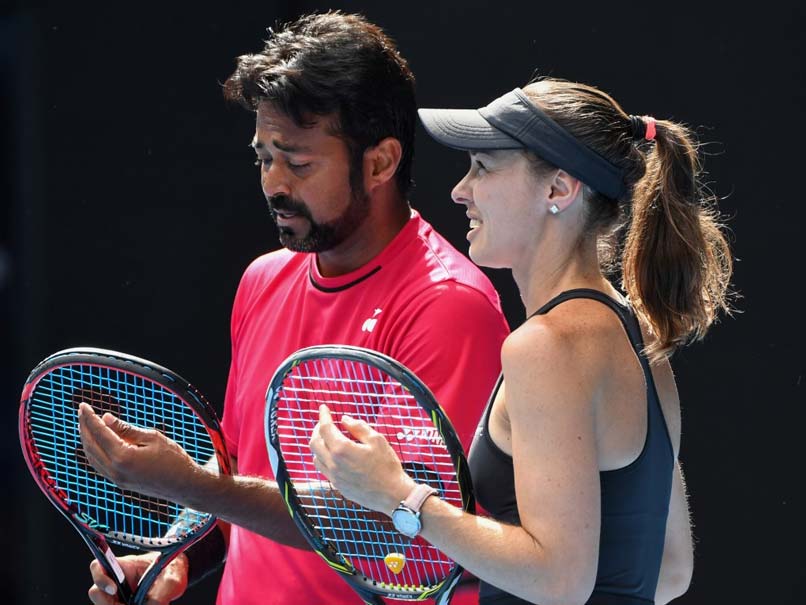 Leander Paes and Martina Hingis were beaten 3-6 2-6 in the quarter-final.© AFP

Indian tennis ace Leander Paes and his Swiss partner Martina Hingis crashed out of the mixed doubles competition of the Australian Open after a straight-set defeat in the quarterfinals here on Thursday.

Paes and Hingis were beaten 3-6 2-6 by the local pair of Sam Groth and Samantha Stosur in a quarterfinal match that lasted 55 minutes.

The Australian duo dominated the match and broke serve of the Indo-Swiss combination in the fifth game to nose ahead before sealing the first set 6-3 with another service break.

In the second set, Paes and Hingis were broken in the fourth game to trail 1-3. The Indo-Swiss pair were 2-5 down when Hingis served only to be broken by the Australians, who sealed the match comfortably.

In the semifinals, Groth and Stosur will meet the second seeded combo of India's Sania Mirza and Ivan Dodig of Croatia. Meanwhile, Zeel Desai lost to Elena Rybakina of Russia 4-6 3-6 in the quarterfinals of the junior girls' singles.

Comments
Topics mentioned in this article
Leander Paes Martina Hingis Samantha Stosur Samuel Groth Tennis
Get the latest updates on India vs South Africa and check out  Schedule, Results and Live Score. Like us on Facebook or follow us on Twitter for more sports updates. You can also download the NDTV Cricket app for Android or iOS.