Kvitova out, Wozniacki through in Sydney

Fifth-seed Czech Kvitova, the 2011 Wimbledon champion, continued her form slump in Sydney, losing 6-1, 6-1 to Cibulkova in little more than an hour. 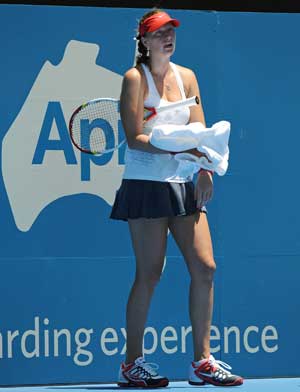 World number eight Petra Kvitova's Australian Open preparations were dealt another blow Sunday when she was trounced in straight sets at the Sydney International by Slovakia's Dominika Cibulkova.

Fifth-seed Czech Kvitova, the 2011 Wimbledon champion, continued her form slump in Sydney, losing 6-1, 6-1 to Cibulkova in little more than an hour.

It follows her upset second-round exit from this month's Brisbane International, falling 6-4, 7-5 to Russia's Anastasia Pavlyuchenkova, and her withdrawal from November's WTA Championships in Istanbul due to illness.

Denmark's Caroline Wozniacki had more luck, downing Urszula Radwanska 6-1, 6-2 in a powerful return to form that saw her take the first set in just 26 minutes.

The Dane said she was relieved to notch a win ahead of the season's first Grand Slam, which begins in Melbourne Monday week.

"It was quite hot out there, especially towards the end of the second set you could really feel it was starting to heat up," said the former world number one.

"I'm just happy to get the first win of the season under my belt and just move on."

Wozniacki said she was hopeful of regaining top ranking despite an inconsistent 2012 in which she exited Wimbledon and the US Open in the first round.

"Within myself, I believe I can get back there," she said. "But it's a lot of hard work and there are a lot of great players so you never know what's going to happen," she added.

"The most important thing is that you're healthy and I'm going to play as best I can and win as many tournaments as I can and the ranking will come if you play well."

The pair fuelled speculation they were engaged last month when Wozniacki was photographed with a large ring on her left ring finger ahead of the Brisbane International.

In November McIlroy skipped the $7 million WGC-HSBC Champions to watch Wozniacki play tennis in Bulgaria, and she then followed him to tournaments in Singapore and Hong Kong.

However Danish women often wear wedding rings on their right hand, and Wozniacki is also known for her penchant for practical jokes.

McIlroy was due to fly out of Australia Sunday night to start preparing for the Abu Dhabi golf championship later this month.

Comments
Topics mentioned in this article
Tennis Caroline Wozniacki Petra Kvitova
Get the latest updates on ICC T20 Worldcup 2022 and CWG 2022 check out the Schedule, Live Score and Medals Tally. Like us on Facebook or follow us on Twitter for more sports updates. You can also download the NDTV Cricket app for Android or iOS.