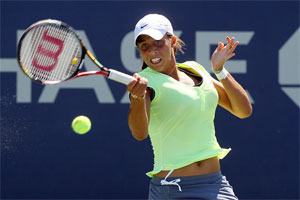 Williams, 21, will be playing in his second career Grand Slam tournament. He qualified for this year's US Open and lost in the first round.

Comments
Topics mentioned in this article
Tennis Rhyne Williams Madison Keys
Get the latest Cricket news, check out the India cricket schedule, Cricket live score . Like us on Facebook or follow us on Twitter for more sports updates. You can also download the NDTV Cricket app for Android or iOS.