Anderson, 26, is coming off a successful week at the mixed teams Hopman Cup in Perth for South Africa, where he beat Fernando Verdasco and John Isner. 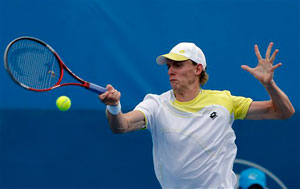 Towering Kevin Anderson became the first South African to reach the semi-finals of the Sydney International in nine years with victory over Denis Istomin on Thursday.

The 36th-ranked Anderson accounted for the Uzbek 6-4, 6-3 in 84 minutes and will face last year's finalist Julien Benneteau of France in Friday's last four.

The last South African to reach the last four was Wayne Ferreira.

Anderson, who is 6 feet 8 inches (2.03 metres) tall, is bidding to claim his third ATP title after previous victories in Delray Beach and Johannesburg.

"It's always good to start the year off on a good note," he said.

"It's still just the second tournament and my sights are set on the Australian Open, but this is a great opportunity for me. I'm really pleased to be in the semi-finals."

Anderson, 26, is coming off a successful week at the mixed teams Hopman Cup in Perth for South Africa, where he beat Fernando Verdasco and John Isner.

"I've had a really good off-season. Practised hard. I think the Hopman Cup was a fantastic event," he said. "I felt it was a great opportunity for some very good preparation.

"Coming into Sydney, I've had some good matches under my belt from last week and I've been able to keep that going. I've felt better with each match."

Benneteau, who lost to Finland's Jarkko Nieminen in last year's final, was too strong for American qualifier Ryan Harrison, winning 6-4, 6-2.

Comments
Topics mentioned in this article
Tennis Julien Benneteau Denis Istomin Kevin Anderson
Get the latest updates on ICC T20 Worldcup 2022 and CWG 2022 check out the Schedule, Live Score and Medals Tally. Like us on Facebook or follow us on Twitter for more sports updates. You can also download the NDTV Cricket app for Android or iOS.