Juan Martin del Potro defeated Slovenian qualifier Grega Zemlja 7-5, 6-3 on Sunday to win his first title at the Austrian Open and improve his standing in the race to the year-end championships. 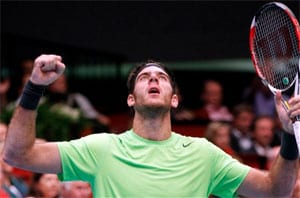 Juan Martin del Potro defeated Slovenian qualifier Grega Zemlja 7-5, 6-3 on Sunday to win his first title at the Austrian Open and improve his standing in the race to the year-end championships.

The Argentine top seed made a triumphant comeback form one month away with a left wrist injury as he spent more than an hour winning the first set against the number 70 playing in the first final of his career.

It took just over half that time to finish the job on a first match point after one hour 41 minutes.

Del Potro added Vienna to trophies claimed this season in Marseille and Estoril.

Del Potro stands provisional seventh in the points race for one of three remaining positions in the ATP World Tour Finals starting on November 5.

The South American claimed his title in Vienna on his third try after losing the 2011 final and going out in the second round in his 2008 debut.

Zemlja set a number of personal bests this week including his first top 20 win, over Tommy Haas in the quarters, and first top 10 win, over Janko Tipsarevic in the semi-finals, and his best-ever performance at an ATP event.

Comments
Topics mentioned in this article
Robin Haase Juan Martin del Potro Marinko Matosevic Tennis
Get the latest updates on IPL 2020, check out the IPL Schedule for 2020 and Indian Premier League (IPL) Cricket live score . Like us on Facebook or follow us on Twitter for more sports updates. You can also download the NDTV Cricket app for Android or iOS.