Former US Open champion del Potro had to dig deep to beat Spain's Nicolas Almagro 7-6, 7-6 in an electrifying encounter to reach Sunday's final of the $1.43 million Tokyo hard-court event. Third seed Raonic ruthlessly dispatched Croatia's Ivan Dodig 7-6, 6-1 after a spot of early bother, closing out the first semi-final with a flurry of lightning-quick aces. 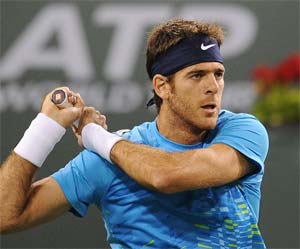 Former US Open champion del Potro had to dig deep to beat Spain's Nicolas Almagro 7-6, 7-6 in an electrifying encounter to reach Sunday's final of the $1.43 million Tokyo hard-court event.

Third seed Raonic ruthlessly dispatched Croatia's Ivan Dodig 7-6, 6-1 after a spot of early bother, closing out the first semi-final with a flurry of lightning-quick aces.

Del Potro, runner-up to Tomas Berdych in 2008, squeezed through the first-set tiebreak 9-7 with a cross-court backhand that nibbled the edge of the line, prompting a wry exchange of grins between the players.

Sixth seed Almagro continued to go toe-to-toe with the giant Argentine in the second set, again forcing a tiebreak, but del Potro, his blue bandana soaked in sweat, had too much firepower and took it 7-1 on a fierce serve that almost knocked his opponent over.

"We both played at our maximum," world number seven del Potro told reporters. "He hit some unbelievable shots and I had to come back with some amazing shots. One or two points can be the difference and I played two good tiebreaks and played well at the important moments."

Raonic, yet to drop a set in Tokyo after winning his fifth career title in Bangkok last weekend, could prove a tough nut to crack for del Potro, who is playing his first tournament since a shock second-round exit at last month's US Open.

The baby-faced Canadian, beaten by Kei Nishikori in the 2012 final, calmly overturned a 4-1 deficit in the first-set tiebreak to take it 7-4 with a rocket serve nudging 230kph.

Local hero Nishikori's reign as champion came to a halt against Almagro in Friday's quarter-finals.

"Tomorrow's a final and anything can happen," added del Potro, currently sixth in the Race to London standings for the season-ending World Tour Finals.

"Milos is serving so hard and just won a tournament beating Berdych in the final. I don't know who's the favourite but he will be a very difficult opponent."

A fired-up Raonic quickly moved through the gears in the second set, securing a double-break with a crunching backhand pass.

The 22-year-old swiftly delivered the coup de grace with three straight aces - his 12th sealing victory after an hour and 23 minutes - to ensure he will move up from 11th to 10th in the race to play at the eight-man Tour Finals from November 4-11.

"In the second set I started swinging a little more freely," said Raonic, bidding for a third title of the season.

The way the world number 11 tore through the second set will have given del Potro food for thought.

"It will be important I dictate tomorrow," said Raonic, who beat the Argentine in their only previous meeting in Montreal earlier this year. "I have to take control of my serve and keep him back as much as possible. I just have to focus on the things I can control."

Comments
Topics mentioned in this article
Tennis Juan Martin del Potro Fernando Verdasco Milos Raonic
Get the latest updates on ICC T20 Worldcup 2022 and CWG 2022 check out the Schedule, Live Score and Medals Tally. Like us on Facebook or follow us on Twitter for more sports updates. You can also download the NDTV Cricket app for Android or iOS.