Del Potro, a semi-finalist last year, missed this week's Portugal Open through illness and has still not recovered. 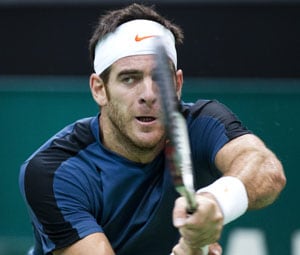 Juan Martin Del Potro of Argentina, the world number seven, has pulled out of next week's Madrid Masters as he is still suffering from a viral infection, the tournament organisers announced on Friday.

Del Potro, a semi-finalist last year, missed this week's Portugal Open through illness and has still not recovered.

He has not played since being knocked out in the second round of the Monte Carlo Open in mid-April.

Comments
Topics mentioned in this article
Tennis Mahesh Bhupathi Mark Knowles Roger Federer Rafael Nadal Samantha Stosur Juan Martin del Potro Novak Djokovic
Get the latest updates on ICC T20 Worldcup 2022 and CWG 2022 check out the Schedule, Live Score and Medals Tally. Like us on Facebook or follow us on Twitter for more sports updates. You can also download the NDTV Cricket app for Android or iOS.