Del Potro stretched his Washington win streak to 14 matches by adding to the titles he won in the US capital in 2008 and 2009. 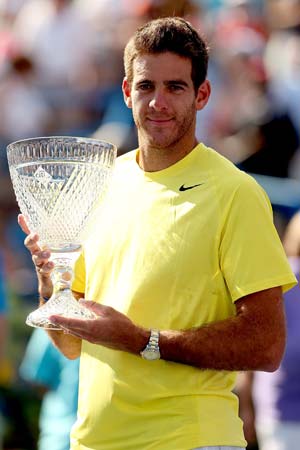 Juan Martin del Potro showed he deserves to be among the favorites to win the US Open by rallying to beat John Isner in Sunday's final of the Washington Open.

The 24-year-old top seed from Argentina shook off a sluggish start to beat the US eighth seed 3-6, 6-1, 6-2 for his third title in six years at the $1.76 million ATP and WTA hardcourt event, a tuneup for the year's final Grand Slam event beginning in New York in three weeks.

"I would have to be a favorite," del Potro said. "I'm playing well. To win tournaments and beat these guys, you have to be fit and in good condition.

"But I have a few more guys playing better than me, and they have been favorites forever."

"I would put him the smallest hair behind Djokovic and Murray," Isner said of del Potro. "It would just be those guys right now. He would be third favorite."

In his first event since an epic five-set loss to Djokovic in the longest semi-final in Wimbledon history, del Potro showed his left knee was fine after an injury at Wimbledon.

"Honestly, I'm surprised to win this tournament after a month without competition," del Potro said. "To win my first tournament on hardcourt, it means a lot. It gives me confidence to keep going and get closer to the top guys."

Del Potro stretched his Washington win streak to 14 matches by adding to the titles he won in the US capital in 2008 and 2009. The last time he won in Washington he went on to win the US Open, the only Grand Slam title since the 2005 Australian Open not taken by Federer, Nadal, Djokovic or Murray.

Seventh-ranked del Potro won his 15th career ATP title, his second of the year after Rotterdam in February, and improved to 4-0 all-time against Isner, the ATP season aces leader, despite not getting to sleep until 3 am after a rain-interrupted semi-final.

"It was a little frustrating to me to finish so late last night. I started really low in the match," del Potro said.

"I go almost out of the court to take the ball, but I started to return well in the second set. I found a really quick break in the second set and that helped keep me fighting, and in the third set I played my best tennis of the tournament.

"I hit some unbelievable forehands. I played really well from the baseline."

Isner, ranked 20th, missed out on his third crown of the year after title runs last week in Atlanta and in April at Houston.

"I was worn out out there," Isner said. "I have played a lot and it did ultimately take its toll on me, but even if I was fresh, I don't know if I could have taken that match.

Del Potro broke Isner in the fourth and sixth games of the second set, in each taking an Isner overhead smash and firing back a lightning-like forehand winner.

Isner netted a forehand to surrender a break in the seventh game of the third set and del Potro saved three break points in the final game before taking the title after 89 minutes on a backhand cross-court winner.

Slovakian seventh seed Magdalena Rybarikova won her second Washington title in a row, beating German Andrea Petkovic 6-4, 7-6 (7/2) in the women's final, for her fourth career WTA crown and her first of the year.