Jerzy Janowicz's extraordinary campaign in what is his first ATP Masters event continued here on Saturday as the Pole reached the final after beating Frenchman Gilles Simon 6-4, 7-5 in the Paris tournament. 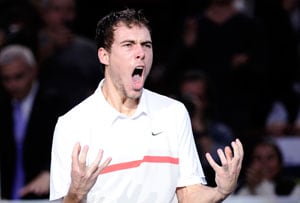 Jerzy Janowicz's extraordinary campaign in what is his first ATP Masters event continued here on Saturday as the Pole reached the final after beating Frenchman Gilles Simon 6-4, 7-5 in the Paris tournament.

He will play David Ferrer in Sunday's final after the in-form Spaniard saw off France's last representative Michael Llodra 7-5, 6-3.

Janowicz, 21 and more acquainted with the second tier Challenger tour, had already disposed of among others US Open champion Andy Murray and he required just over two hours to end Simon's interest.

And he joked his run here is turning him into a household name back home.

"This tournament is going to change a lot - in Poland, the street where I live is totally blocked with dozens of TV vans out there is no way to get to my house right now," laughed the 22-year-old from Lodz.

Janowicz, who had to come through qualifying to make the draw proper, eventually ended Simon's resistance in the second set by breaking for 6-5 and safely wrapped it up in the next game on his own service.

Janowicz admitted the butterflies got to him before the match but he overcane them.

"I was a bit nervous before the match - it was my first semi-final at this level. I didn't know if I would do myself justice.

"But finally I had an incredible feeling as I did yesterday and two days ago (in beating Murray)," said the unheralded Pole.

"It's been a fantastic week - I'd never have believed it coming in. I am pretty confident by nature but I got here through the qualifications. To be in the final I can hardly believe it.

"Now I am hoping for new sponsors and no longer have money problems."

Comments
Topics mentioned in this article
Tennis Gilles Simon Jerzy Janowicz David Ferrer
Get the latest updates on IPL 2021, IPL Points Table , IPL Schedule 2021 , live score . Like us on Facebook or follow us on Twitter for more sports updates. You can also download the NDTV Cricket app for Android or iOS.