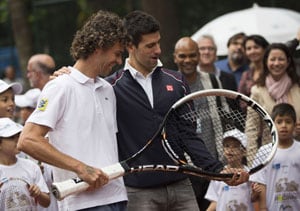 Just five days after winning the ATP World Tour Finals with a straight sets victory over Roger Federer in London, Djokovic fell to the former world No.1 Kuerten in front of 10,000 fans at the Maracanazinho Arena in Rio Saturday, reports Xinhua.

The 36-year-old Kuerten showed his appreciation to the home fans afterwards by drawing a love heart on the clay surface, just as he did after winning his third French Open title in 2001.

Djokovic also won the affection of fans by dancing and impersonating the Brazilian idol with a curly-haired wig.

"I'm not going to be able to move for days," said Kuerten, who was forced to retire in 2008 due to a chronic hip injury.

"The victory is important but the most important thing is to be enjoying this moment with Novak because I thought I would never relive this type of experience after my injuries."

"I can't thank Novak enough. He is aware of the impact he can make as a person and is a really special guy."

Djokovic said he felt honoured to have played in Brazil for the first time against Kuerten.

"Guga (Kuerten) is one of the most charismatic players to have been involved in tennis and today he showed why," Djokovic said. "Brazilian tennis has a great spirit and big soul. Serbia is a small country but it has a lot in common with Brazil. We are very emotive people."

Comments
Topics mentioned in this article
Tennis Mahesh Bhupathi Rafael Nadal Novak Djokovic Jie Zheng Brazil
Get the latest updates on IPL 2021, IPL Points Table , IPL Schedule 2021 , live score . Like us on Facebook or follow us on Twitter for more sports updates. You can also download the NDTV Cricket app for Android or iOS.