While Miami evokes unhappy memories on and off court for Richard Gasquet, the French tennis star is hoping to exorcise some ghosts when the ATP tournament gets underway on Wednesday. 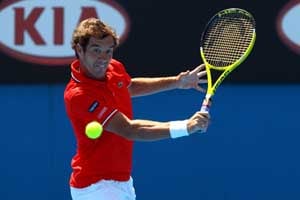 While Miami evokes unhappy memories on and off court for Richard Gasquet, the French tennis star is hoping to exorcise some ghosts when the ATP tournament gets underway on Wednesday.

In March 2009 Gasquet tested positive for cocaine after partying in a Miami nightclub, an event widely considered to have hindered the career of a man who has yet to live up to the potential Grand Slam winner expectations once predicted for him.

But after regaining a place in the top 20 and fine form at Indian Wells last week it looks like his confidence is back and that he may finally be ready to reverse his fortunes.

"Not only because of the difficult memories but also because I have only ever won one match there," said Gasquet, who is known for his elegant single-handed backhand.

"So I'm happy to get here feeling so well. I've been saying to myself its time to exorcise some ghosts," said the 24-year-old who gets his campaign underway Friday against Croatian veteran Ivan Ljubicic.

It is now 18-months since he was cleared of the cocaine charge, but he has struggled to get his career and his life back on track since then.

But at Indian Wells, Gasquet beat two players inside the world top ten in the form of Austrian Jurgen Melzer and American Andy Roddick before Novak Djokovic, who is unbeaten this season, knocked him out in the quarter-finals.

Gasquet is hoping people will now give him space to thrive in his own good time.

"I don't want people saying Gasquet is going to be world number one or that I'm going to take a six-year break or any such mad story," he said.

"I'm playing well and want to go far, but I've had enough of other people's expectations. That's enough! I want to have some fun now."

Gasquet was world ranked 74th this time last year and is now at number 18 and enjoying his tennis again under the guidance of co-coaches Sebastien Grosjean and Ricardo Piatti.

Gasquet tested positive for cocaine in March 2009 and was banned for two and a half months. He claimed he had picked up traces of the drug when he kissed a girl in a Miami night club.

An independent tribunal, however, later gave credence to his story and cleared him of 'significant fault or negligence'.