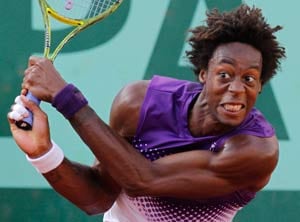 Gael Monfils shrugged off pain in his left hip to reach his second ATP final of the season on Friday at the Winston-Salem Open.

The win was the first for the 32-year-old Austrian over Querry after two defeats.

Melzer has lost to Monfils in four previous matches, but Monfils said the injuries that have hampered him in recent weeks make him the underdog.

"I still think I'm the outsider. I am the outsider, and I like it," Monfils said. "I'm happy that hopefully I can keep going.

"I'm trying get back into shape. I've worked hard this week and it's paying off well."

Monfils called for the trainer after just 11 minutes on court, having surrendered two breaks of serve to trail Dolgopolov 0-3.

But after a consultation and on-court treatment, he changed his attitude and got on with the job of mounting a comeback.

"I had thigh muscle pain which was going to my hip. The trainer told me I was just tight," Monfils said.

"When we resumed I told myself to focus on the match, not the pain.

"OK, I have some pain but it's no reason not to play tough. I just needed to focus less on my body.

"I tried to keep it simple and it worked," added Monfils. "I needed to get my rhythm back."

Monfils kept the pressure on Dolgopolov, who faced 13 break points in the contest.

In the first set, the Ukrainian double-faulted to lose the sixth game for 4-2 and then found himself at 5-all after saving one break point but then netting a backhand on another.

In the tiebreaker, Monfils saved three set points and won the opener on his own second chance.

Monfils, competing on hard courts for the first time this month after missing the Masters events in Montreal and Cincinnati with an ankle injury, took control in the second set.

He broke Dolgopolov for a 2-1 lead on another double-fault from the Ukrainian.

Monfils broke again in the final game of the match, converting his second match point to seal the win in 97 minutes.

The victory was Monfils' second over Dolgopolov this year. He also won their Australian Open first-round meeting.

Monfils, runner-up at the claycourt tournament in Nice in May, will be seeking a fifth career title on Saturday.

Melzer will be playing his second final of 2013 after Zagreb in February,

"Any time you get a win before the US Open, you take it," Melzer said. "It was a tough match and especially for me near the end of the second set when Sam lifted his game.

"But I won in the end and I'm very happy to be in the final."

The showdown will be the 13th career final for Melzer, who owns four ATP titles.

Comments
Topics mentioned in this article
Tennis Alexandr Dolgopolov Nicolas Almagro Jurgen Melzer Gael Monfils
Get the latest updates on IPL 2021, IPL Points Table , IPL Schedule 2021 , live score . Like us on Facebook or follow us on Twitter for more sports updates. You can also download the NDTV Cricket app for Android or iOS.