Damir Dzumhur from Sarajevo had two of the biggest wins in his career -- over former top tenners Mikhail Youzhny and Marcos Baghdatis -- to reach the third round in Paris. Roger Federer was too much for him to cope with on Friday as he lost 6-4, 6-3, 6-2. 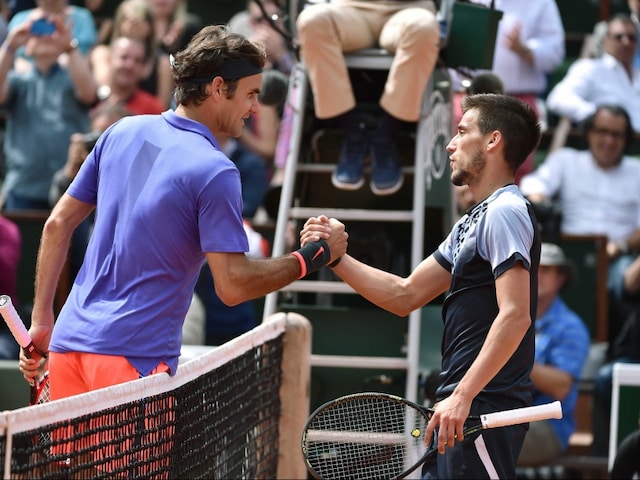 Damir Dzumhur's run into a French Open third round clash with Roger Federer might have made big waves back home in Bosnia-Hercegovina, but he does not expect it to change what he sees as the dire future of tennis in his Balkan homeland. (Federer Coasts Into Last Sixteen)

The 23-year-old from Sarajevo had two of the biggest wins in his career -- over former top tenners Mikhail Youzhny and Marcos Baghdatis -- to reach the third round in Paris.

Dzumhur though was pleased with the way he played throughout, which was just as well as he had a big audience watching his every move back home. (Ana Ivanovic Advances to Pre-Quarters)

"It's a little bit strange, but a few people from Bosnia told me that today everybody was in cafes or in homes -- nobody in streets -- watching me," he said.

"I am playing just third round of Grand Slam, but for Bosnia it's (like) our football team playing finals of Champions League, it's like that.

"So I'm happy that all the people were with me today, that I had a lot of friends coming -- came to watch me today on court, and of course my family and my coach."

Following a successful junior career which saw him rise to third in the world rankings, Dzumhur turned pro in 2009 and he became the first player from his country, which endured a bloody civil war from 1992-1995, to play in a Grand Slam tournament when he reached the Australian Open third round last year.

He has steadily moved up the ATP world rankings to just outside the top 100 currently but still plays most of his tennis on the second-tier Challenger Tour.

Still, he harbours hopes of breaking into the top 60 by the end of this year and intends to move on from there.

But one thing he does not believe is that his international exposure will result in other youngsters from Bosnia following in his footsteps.

"I'm afraid for next generations that are coming. They don't have support. It's not going to help. I know," he said with a shake of his head.

"Even when I was junior, I was No.3 junior but I didn't have any support from federation, no support from country. This is not going to help anything, I'm sure.

"Every time I make some good results they say it's historic result and I'm a hero and everything.

"It's okay. I made good result, but what about next generation? They need coaches and courts and facilities. They don't have it.

"Unfortunately the situation of tennis in Bosnia is really bad."

Comments
Topics mentioned in this article
Roger Federer Damir Dzumhur Tennis
Get the latest Cricket news, check out the India cricket schedule, Cricket live score . Like us on Facebook or follow us on Twitter for more sports updates. You can also download the NDTV Cricket app for Android or iOS.