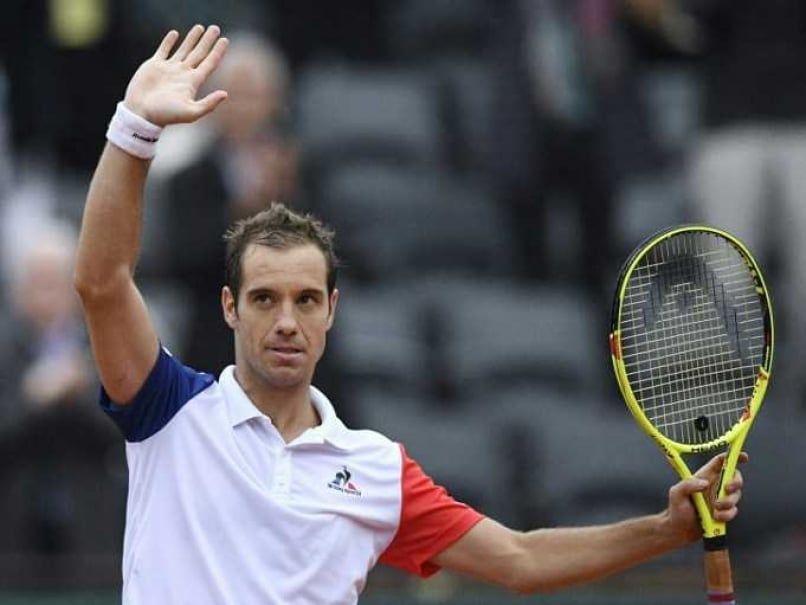 Richard Gasquet, who is the only French player left at Roland Garros, will go up against second seed Andy Murray for a place in the semi-finals.© AFP

Richard Gasquet salvaged French pride with his four sets win over Kei Nishikori in the fourth round of the French Open on Sunday and now he wants to take it three steps further and end a 33-year long drought.

The 29-year-old from the southern town of Beziers started the day as the sole French player -- male or female -- still standing after a disappointing first week for the big home contingent.

Gael Monfils did not even start the tournament, laid low by a mystery virus, and Jo-Wilfried Tsonga was forced to abandon while leading in the first set of his fourth round match against Ernests Gulbis with a leg injury.

All the Frenchwomen went out on Saturday which left Gasquet, the one-time great hope of French tennis but who, to date, has failed to realise his potential, as the last card to play.

On a gloomy, rainy day in Paris he finally made it to the last eight at Roland Garros by defeating the fifth seed Nishikori and now goes up against second seed Andy Murray for a place in the semi-finals.

"I think that he (Murray) is one of the biggest fighters on the court. He's fighting so good. He's in the best physical condition on the tour with (Novak) Djokovic," Gasquet said of the Scot.

"Of course he's in confidence. He played well this year, winning in Rome. I know what I need to do. I need to play very offensive, because if not, it will be difficult for me to win.

"So of course I need to play a good match. Of course he will be the favourite, but I have nothing to lose and I want to try to win this match."

Adding to the pressure on Gasquet's, at times, frail shoulders is the fact that no Frenchman has won the singles title in Paris since Yannick Noah in 1983 -- just the second French winner since World War II.

That is a long time to wait for a country that invests a huge amount of money into tennis and a public that thirsts for the 1930's days of the fabled Mousquetaires -- Rene Lacoste, Jean Borotra, Henri Cochet and Jacques Brugnon.

Gasquet credits much of his re-emergence as a challenger at Roland Garros to his coach of the last year -- Sergei Brugera, the Spaniard who won back-to-back Grand Slam titles in Paris in 1993-94.

"I think these guys have amazing experience, much more than coaches, who have never played tennis," he said.

"The pace of the balls. They see tennis. They know what it's about. That's what I really like about him. It's this huge experience.

"He's played the biggest games in the world, and you can't make that up. That's why players often take coaches who have won Grand Slam finals, because their experience is very powerful."

Comments
Topics mentioned in this article
Richard Gasquet Kei Nishikori Andy Murray Tennis
Get the latest updates on Olympics 2020, Olympics 2020 Medal Tally, Live Cricket Score . Like us on Facebook or follow us on Twitter for more sports updates. You can also download the NDTV Cricket app for Android or iOS.